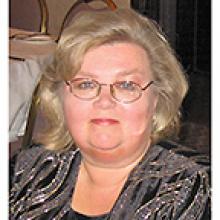 
She was my whole world. She was proof that unconditional love is real, that kindness is always the best approach, and that love and friendships are life's greatest treasures. Now she is gone. Donna succumbed to a sudden illness on July 29, 2022, just weeks after joyfully celebrating her 75th birthday.
I remember meeting Donna on Easter weekend 1984. We both knew it was meant to be. We dated and were married the following year. In our 38 years together, I came to know, respect, and cherish an incredible woman. And being with her made me a better man.
Born Donna Lee Studney on July 12, 1947, the only child of John and Jennie Studney, she grew up in Winnipeg's north end and attended local schools Lansdowne, Lord Nelson, Andrew Mynarsky and Sisler. During her childhood, she formed countless lifelong friendships.
Following school, Donna took a position at Prudential Insurance. After a few years there, she accepted a position at Manitoba Hydro, where her professional and private life flourished in harmony. After gaining experience in various departments, she found her true calling when she joined the newly created Affirmative Action team.
A leader in progressive human resource practices, Manitoba Hydro adopted an Affirmative Action policy, later renamed Employment Equity, in the early 1980s. This resulted in a major shift in how the company recruited, developed and retained a diverse workforce. Donna was thrilled to be a member of this newly formed department and neither she - nor the company – ever looked back.
Combining her natural and authentic way with people with her keen organizational abilities, Donna engaged meaningfully with the wider community; she participated in countless career fairs, school presentations, informational interviews and cultural events, while also representing Manitoba Hydro on several employment-related Boards. She spoke happily of her contributions.
A trusted first point of contact for many inside and outside the company, Donna was often asked to identify resources within her community network to assist an employee or their family member who had a particular need. Her approach was a rare balance of no-nonsense and empathy. Donna was so proud of the new employees she supported as they launched and flourished in their Manitoba Hydro careers. Though too humble to say so herself, she was instrumental in the recognition and awards the company's diversity initiatives received over the years. She had positive impact on so many and her career at Manitoba Hydro brought her joy, satisfaction and lifelong friendships.
Travel was another source of joy for Donna, and we enjoyed annual trips to Maui in spring and Aruba in fall. Not surprisingly, Donna formed lasting friendships while on vacation, too. And she was so happy see these friends this spring after the pandemic restrictions were lifted.
Predeceased by her parents, John and Jennie Studney and her father-in-law James Aitchison, Donna is survived by me - her loving husband, Glenn; her mother-in-law Elizabeth Aitchison; her sister-in-law Peggy Aitchison, nieces, Amanda Dowbenko (David), Jane Swain (Kevin) and Heather Wittick and great- nieces and nephew, Tessa, Dexter and Rylee, along with her cousins in Yorkton, SK, Karen Norman (Ken) and John Mandziuk and nephews, Daniel and Matthew Mandziuk. Donna is also survived by her nieces and nephew from her previous marriage; Brenda (Glenn) Steele, Michele (Scott) Smith, Nicola (David) Beaudry and Christopher Guenette and many cherished friends.
I would like to give my heartfelt thanks to the paramedics and the emergency room team who provided Donna's care in her last moments.
Donna's funeral will be held at 11:00 a.m. on Tuesday, August 16, 2022 at Westworth United Church, 1750 Grosvenor Avenue, Winnipeg, MB with Reverend Marilyn Anderson Corkum presiding. A short celebration of Donna's life – a life made meaningful with love, loyalty, compassion, dedication and understanding - will follow in the church hall.
If desired, donations may be made in memory of Donna to the St. Boniface Hospital Foundation, 409 Tache Ave. C1026, Winnipeg, MB R2H 2A6


Donna Aitchison, beloved wife of Glenn Aitchison, passed away on July 29, 2022 at the age of 75.
Funeral arrangements are pending and a longer obituary will be published in the Saturday, August 13, 2022 edition of this paper.