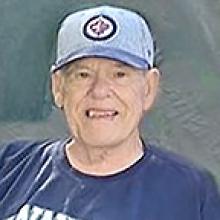 
On the morning of August 15, 2022, Alain passed away peacefully in his sleep. He spent his final days surrounded by his loving family, which brought him so much joy and peace.
Al was born on October 1, 1943 at the St. Boniface Hospital and was the seventh of eight children born to Marie and Raphael Lauze. He is predeceased by his mother and father; brother Dennis (Liz); sister Mariette and brothers-in-law, Babe and Johnny. He is survived by his wife Michele; children, Jason (Sally), Kelli (AJ), Lynn (Jeremy) and their mother Shirley, Michael (Tiffanie) and Jill; grandchildren, Amelie, Aiden, Jayden, Rafe, Alyson and Jase; siblings, Jeannine, Claude (Doris), Armelle, Marie, Robert (Clara); brother-in-law Leo and many nieces and nephews.
Al grew up in St. Norbert, Manitoba before the family moved to St. Boniface when he was a teenager. Following in his father's footsteps, Al worked at Modern Dairies Ltd. as a young man (mostly for the chocolate ice cream) and then at Robinson, Little and Company, before beginning his long career with Winnipeg Transit. Outside of work, Al dedicated much of his free time to playing, coaching and watching sports. When he wasn't participating in sports, you could find him at the Glenwood Community Center volunteering his time in any way he could. Al had a love of music (especially country), sitting around a campfire or kitchen singing along to his favourite songs and playing crib.
On August 13, just two short days before his passing, Al got to have one last hooray, that he had been waiting for with all of his kids and almost all his grandkids at his home in Pinawa. His world famous Louisiana ribs were made, his favourite songs were sung and many, many, many lame Lauze jokes were shared by all. He will be missed by everyone that had the pleasure of knowing him. "I'll get a place in heaven sir and sell the gospel news."
The family would like to offer sincere thanks to the team at the HSC Home Hemo-Dialysis Unit as well as Dr. Bruneau and the nurses/staff at the Pinawa Hospital.
In lieu of flowers, please send donations to the Kidney Foundation of Canada, Diabetes Canada, or the Heart and Stroke Foundation of Canada.