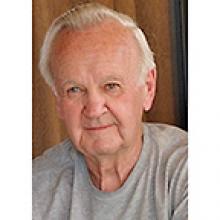 
Ben was born April 23, 1930 to George and Hilma Jorgenson and spent his early years living on the family farm outside of Ste. Elizabeth, the second youngest of 10 brothers and two sisters. As a farm boy he was subject to all the requirements and responsibilities needed to run a three-section operation. Although Ben and Berny first met in the Grace Hospital nursery when they were only days old, they wouldn't recognize their special bond until years later when in his early teens Ben moved into the city to attend junior high school and reacquainted himself with his future wife and lifetime love. Ben was immediately welcomed by Berny's parents, often delaying their dates by playing cards with her father.
After graduation Ben started his employment at Dominion Envelope and Cartons, later Continental Can, quickly becoming the Western Sales Manager, and then moving on to Dover Industries. Ben was always involved in whatever was going on around him. He worked behind the scene in many political campaigns, was a President of the Winnipeg Executives, Vice President of the Winnipeg Chamber of Commerce, Chairperson of the Packaging Association of Canada, President of Rossmere Golf and Country Club, and a member of his condo association. Although he enjoyed curling in his earlier years, his passion was golf, which he continued into his 80s, meeting many lifelong friends both at Rossmere and St. Charles.
Ben and Berny were married in 1952, the start of a 67-year journey that could serve as a model union. They started to grow their family in 1955 when their son John was born, followed by their daughter Jeri in 1957. The light of their life, granddaughter Jessica, arrived in 1992.
Ben and Berny shared a unique love story, one others could only dream of. Countless memories were shared throughout their life journey by each other's side. Strength, stability, and caring for each other and those around them were hallmarks of their marriage.
In the early hours of December 2 2019, surrounded by his loved ones, Ben's huge heart finally gave out on him. Left to cherish his memory are soulmate Berny, son John (Grace), daughter Jeri (Kevin), brother Larry (Colette) and numerous nieces, nephews, and their families. He will be greatly missed as devoted Bubsy to much loved granddaughter Jessie. As one of his legacies he leaves the Jorgenson Family Reunion, started in 1980, and still occurring every four years.
Cremation has taken place and a brief interment was held. Due to delays caused by Covid-19, a Celebration of Life is being held September 24, 2022 at 2:00 p.m. at the Chapel Lawn Funeral Reception Centre, 4000 Portage Ave.