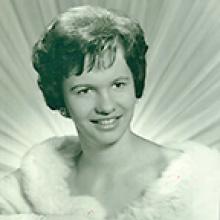 It is with great sadness to announce the passing of our beloved mother, Elsie Ann Kennedy, on August 31, 2022, at St. Boniface General Hospital.
Elsie was predeceased by her parents, Paul and Anne Solomon; brothers, Peter, Donald, and Maurice. Elsie is survived by her brother and wife, Joseph and Maline Solomon, and her sister Martha and Ralph Eremko from Alberta.
Elsie leaves behind her children, Robert (Prudence), Joseph (Cristan) and granddaughter Amy.
Elsie was born on July 27, 1943 in Tolstoi, Manitoba where she lived until she moved to Winnipeg in 1960.
Elsie was introducted to Robert Kennedy Sr. and married in 1967.
Robert Jr. was born in 1972, Joey in 1974, where she decided to stay home and raise her boys.
Through the years as her sons became older, she returned to the workforce until she found her ideal job in accounts receivable at Fred Douglas Lodge, where she retired after 20 years. She found great reward with interacting and speaking with the Ukrainian residents and their families. After retirement she started volunteering at Holy Trinity Ukrainian Orthodox Metropolitan Cathedral.
Elsie enjoyed many sports, but her passion was really baseball and bowling where she was awarded a pin for bowling a 200-point game. She loved watching Toronto Blue Jays and Winnipeg Goldeyes.
Her greatest accomplishment were her two boys. She was always proud of their achievements in life. When her grandddaugher was born, she became Nana's "little girl". You could see the two of them light up when they were together.
Elsie loved cooking and spending time with her family and friends.
Mom had battled a lung illness for the last couple of years, that would unfortunately shorten the time she would be able to spend with her close family and friends.
She may be gone but never forgotten, her fun-loving spirit and attitude towards life will live on inside all of us.
A small funeral service with immediate family had taken place on September 8, 2022, at Green Acres Funeral Home & Cemetery. Father Oreste and Rose Nharniuk officiated the ceremony.
Special thanks to the staff at St. Boniface Emergency and ICMS for the great care that our mother received during her stay.