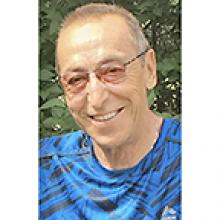 Peacefully, on Saturday, September 17, 2022, Jack Rogowski, at the age of 73, passed away, with his family by his side.
He will be lovingly remembered by his daughter Cynthia (Ray) Romanchuk; grandsons, Owen and Logan; son Jason (Ian); partner Diana Dickson; sister Helen; brothers-in-law, Keith, Larry (Janet), Allan (Diane); and many nieces and nephews. He was predeceased by his loving wife of 38 years, Elaine (nee Houndle); his parents, Lena and Mike; and sister Marie.
Jack was born December 7, 1948 and raised in Komarno, MB. He married Elaine in 1972 and created a beautiful family in Petersfield. Jack had a long 37-year career at Manitoba Hydro working out of Gillam for a short time and then onto the Dorsey station, retiring in 2005. In addition to Hydro, he was the community go-to person and was the definition of Jack of all trades, "modifying" as required. He always offered his time and skilled hands to anyone in need. His stubborn nature often led others wanting to repay his kindness to no avail. You would often find Jack in the yard, whether keeping a perfect lawn in summer, or clearing snow in winter. The end of the driveway was always a welcome meeting spot to catch up with friends and neighbours. Jack took great pleasure in passing on his knowledge and skills, most recently to his grandson Owen; always considered a loving mentor. We will forever miss your hugs and warm embrace.
No funeral will be held, as Jack wished to have a private family gathering.
Flowers are gratefully declined; if so desired, donations can be made to a local charity of your choice. In honour of Jack, make someone smile today.