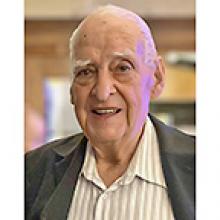 With pensive hearts and deep sorrow, we announce the passing of Frank Albo Sr., who courageously ended his battle with cancer on September 24. Though beset on all sides with a terminal illness, he departed peacefully, stoically, lucid-and in the same way he greeted all of life's challenges-with forbearance and an indomitable will. His body gave out, but never his nimble mind.
Frank was a towering man, a real charmer, captivating and irascible, warm and selfless. He was completely unvarnished, shrewd, and unapologetic. He had not an ounce of affectation in him, no vanity or pretence. Like the anonymous hero in Frank Sinatra's anthem, he did everything his way and without exemption.
He was an incomparable truth-teller with an extraordinary memory. Everyone who knew him had their own personal story and relationship. He was blunt and hilarious, opinionated and wise, and while only self-taught and untutored, he could match quips with Wilde, Twain, Shaw, or even Churchill. Asking for his advice could end up with a viper's bite for he embodied the Marine Corps values of Colonel Nathan Jessup: "You Can't Handle the Truth!" He taught with actions, not with words. He was forged in that post-war age of hardship called the Old Country.
Born in the picturesque mountain town of Grimaldi, Italy, in 1932, Frank was the fourth son of Giuseppe and Gelsomina (née Caria). By age five, he was up at dawn to collect chestnuts with his mother, and before he was eight, he drew crowds of villagers who placed wagers on his computational prowess. Grab a handful of change, and little 'Patata' (mini "potato") would enumerate the sum in a single glance. He later perfected these skills when he mastered Italian card games, Briscola and Tressette. Though severe cataracts made him legally blind, Frank would memorize his first group of 10 cards in a single peek and then direct the entire game with the virtuosity of Rain Man, eviscerating his opponents (and playing partners) for their mere mortal abilities or for the slightest blunder.
His brothers, Antonio (Ofelia) and Gino (Nella), and younger sister Ida (Antonio) remained in Grimaldi, bearing 14 nieces and nephews who lovingly prefixed Zio (uncle) with Grande (large), Magno (great), and Bello (beautiful). He followed the footsteps of his older brother Ercole (Maria) and immigrated to Canada in 1954. Their children, Vivian, Joe, Marina, and Anna would collectively agree that Zio Franco broke the mould.
He first worked as an extra gang labourer with CPR in Edmonton and eventually landed a job as a nightshift foreman at Bryce Bakeries in Winnipeg. His entrepreneurial backbone led to the opening of one of Manitoba's first Italian grocery stores with Ercole in 1961, where they pioneered a customer loyalty program and the importation of Muscatel, Zinfandel, and Alicante grapes for making wine. Albo Brothers on the corner of Bannatyne and Isabel was an Italian community institution, as was Albo's Sports Bar on Sargent and Arlington. In 1972, he went into the grocery business with his devoted wife, Marfisia (née Sparanese), first in the West End and later in St. James. Parkview Meats and Groceries offered free delivery and lines of credit. Customers travelled city-wide for his fine-cut meats, wholesale produce, and open-door hospitality.
More than anything else, he beamed with pride for his children. His first-born, Ida, became a successful hotelier, economist, and philanthropist; Pina, a polyglot lawyer, accomplished CEO, and global insurance leader; Belinda, an award-winning designer, real estate investor, and published author; and his only son, Frank, an acclaimed historian, professional decoder, and digital currencies expert.
He leaves behind extended family, Kim, Charles, and Rose, and nine adoring grandchildren, Marfisia, Isabella, Sebastian, Adrian, Louis, Francesca, Asherah, Elena, and Sophia, along with numerous nieces, nephews, and cousins in Thunder Bay, Edmonton, Victoria, and Italy.
In his later years, he took to slot machines. He generously shared his spoils, knowing full well he hit the biggest jackpot of all in 1958 when he won the hand of his immeasurably beautiful bride, Marfisia. They were married for 37 years before her premature departure to cancer in 1995, one short year after their retirement. His heart broke, but he braved on, alone and without protestation, in the vein of his ancient Roman ancestry. He used local transit (year-round), drank Labatt Blue (at happy hour), smoked scalped cigarettes (from First Nation Reserves), and shopped at Dollarama (for pasta and olive oil), yet he was not for want. He conquered the world from Villa Cabrini to Bar Italia, and he was a fan-favourite everywhere he went: the Centro Caboto Centre, Royal Canadian Legion Branch #252, the Euro Bar in Grimaldi, and of course, the Hotel Fort Garry, where his green thumb and homegrown tomatoes and basil enriched the savoury menu in the Oval Room.
Frank pulled no punches and left everything on the table. We are comforted that his final words were two joyful exclamations to his mother. Perhaps she was calling him back to their humble home in Mpedichiati, or they were reunited under an arbour of chestnuts in Savuto. We certainly know that his passing leaves us with an unfillable void. He was truly one-of-a-kind, the last of a line, and the end of an era. Our beloved patriarch, our Papa, Nonno, Speedy, Zio, little Patata, Frank Albo was simply unforgettable, and he will be sorely missed.
Our heartfelt thanks go to Annitta Stenning for his diagnosis and care at Saint Boniface Hospital and his loyal bestie, Joe Bruni, who was his dearest of companions during his waning years. In lieu of flowers, the family welcomes donations to the Canadian Constitution Foundation, a national non-partisan charity dedicated to defending the protected rights and freedoms of all Canadians.
Funeral Mass will be held at Holy Rosary Church on September 29 at 11:00 a.m., followed by the Celebration of Life at the Hotel Fort Garry at 1:00 p.m.