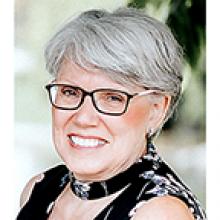 
Jacqueline "Jacquie" Cormier passed away suddenly in her sleep, at the age of 64, on Saturday, October 8, 2022, at home in Winnipeg, Manitoba.
Jacquie was born on November 9, 1957, in Winnipeg. During her childhood, her parents, Clément and Lisette (Bédoret) LeClaire, as well as her two younger sisters, lived with her in Winnipeg and St-Pierre. From a young age, Jacquie showed a keen interest in reading. She would spend hours devouring books with her sister while at home or on road trips. Jacquie also loved the outdoors. She especially enjoyed spending hours in the garden while visiting extended family in rural Manitoba.
Towards the end of high school, she attended Collège Saint-Boniface, where she met Clément (Clem). Their connection intensified as Jacquie spent more time with him while he recovered from a skiing accident in the hospital. Soon after, Clem quickly became a regular at LeClaire family dinners. A few years later, Jacqueline and Clément were married on June 10, 1978. They enjoyed several years as a young married couple before purchasing their first home and starting a family in the early 1980s. Over this same period, Jacquie transitioned from her position at The Bay to a career with Air Canada at the downtown Winnipeg office. Over the course of her 33 years there, she enjoyed many trips with her growing family, as well as long-lasting friendships with colleagues. Jacquie travelled to many locations around the world, including destinations across Europe, Australia, and North America. Family trips to Disney World were treasured.
As the travel industry evolved and became more uncertain, she overcame many challenging years and retired in November of 2013. In retirement, she was able to enjoy many of her favourite things. It's easy to picture Jacquie eating a croissant and enjoying a cup of coffee in her backyard on a sunny summer morning, as she worked through the day's crossword puzzle. Spending time with friends and family, shopping, keeping her yard in pristine condition, and playing a round of golf were also all a part of her weekly activities. Her years as a retiree also coincided with a time when she saw her children grow into adults and she was always delighted to celebrate their achievements, as they obtained advanced degrees, established their careers, and found their life partners.
Jacquie's family was a focal point throughout her life. Her fondness for social gatherings and family connections during her early years likely contributed to her desire to keep traditions going. Throughout her adult life, she did so by being the person who organised and hosted many large family events on a regular basis. She also showed her dedication to maintaining family bonds by taking time to connect with people, regardless of physical distance. Unsurprisingly, she truly cherished the times of year when the entire family was together. This is likely why she enjoyed Christmas so much and would transform her home into a winter wonderland filled with her delicious baking. Although her children were sometimes reluctant to contribute to some of her ideas, like family photos in matching pyjamas, in retrospect, they represent her desire to create memorable moments for her family.
Jacqueline is survived by her husband; her five children and their partners, Damien (Stacey Leach), Geneviève (Jay Shyiak), Christian (Julie Labossière), Véronique (Blair Shewfelt), and Danica (Nicholas Bourgeois); and her five grandchildren (Esme, Harlow, Lucas, Sébastien, and Émilie). She is also survived by her father and sisters, Brigitte and Mireille. Jacquie was predeceased by her mother (1998).
A public memorial service will be held at 10:00 a.m. on October 21, 2022, at the parish hall adjacent to the Saints-Martyrs-Canadiens Parish (289 Dussault Avenue). In lieu of flowers, donations in Jacquie's name may be made to Siloam Mission or a charity of your choice.