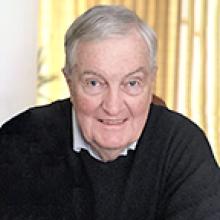 
Peter Alexander Burns died at the Thunder Bay Regional Health Sciences Centre on November 15, 2022, with his family by his side, after a short and complicated illness. He was born on May 7, 1935, to Marjorie Hogg Burns and James Peter Burns in Kirkland Lake, Ontario.
He was involved in many activities during his school days at Kirkland Lake Collegiate where he played football with a passion. When he turned 16 he joined the Canadian Air Cadet Program where he proudly attained his private pilot's licence. Peter went on to study at St. Michael's College at the University of Toronto (U of T) where he completed his Bachelor of Arts. He attained his Bachelor of Laws at the newly minted University of Toronto Law School. In addition to his studies he found time to play for the U of T varsity water polo team and most importantly this is where he met the love of his life, Marilyn Hutt. Together Peter and Marilyn set out from Toronto for Dryden, after answering an ad in the Law Review. Norman F. McAuley was looking for a lawyer to join him in his practice in Dryden. Peter and Norm found similar values in one another and it was a partnership that lasted decades as they built the firm now known as McAuley and Partners. Peter absolutely loved practicing law and serving his clients, which he did wholeheartedly until he retired at the age of 85.
Peter was active in his community and region serving on many non-profit boards and bringing his quiet and principled leadership to each organization. He was an avid skier who, without fail, could be found every Saturday and Sunday at the Dryden Ski Club with his children and then with his grandchildren, either downhill or cross-country skiing. He loved nothing more than being on a ski trip in the mountains with his family where he especially enjoyed (and sometimes contributed to) the on-hill shenanigans of his gang of skiers. In the summer, he could be found in the sauna at the family camp on Thunder Lake with his grandchildren and the music playing loud - the odd jazz piece being inserted in the playlist in his honour. Peter loved flying and retained his active pilot's licence for 70 years flying his super-cub C-FULC. He enjoyed the camaraderie of fellow aviators at the Dryden Flying Club and he was always willing and proud to take a passenger up for a flight--many for their first time on floats or skis--to let them experience the absolute beauty of Northwestern Ontario.
Peter's greatest joy was being devoted to his wife of 61 years, Marilyn, being dad to Bonny (Blair), Brian (Denise) and Michael (Laura) and being "Papa" to his beloved grandchildren, Jayme and Cameron Skene, Julia and Owen Burns, and Eric, Adam and Matthew Burns. Peter is survived by his sisters, Rosemary Ganley and Norah White, his brother Brian Burns and many deeply loved nieces, nephews and cousins.
Please join the family for visitation on Thursday, November 24 from 6:30 p.m. to 8:30 p.m. at the Dryden Community Funeral Chapel with prayers by Father Alan Campeau at 7:00 p.m. A Funeral Mass will be held on Friday, November 25, 2022 at 11:00 a.m. at St. Joseph's Roman Catholic Church in Dryden. Interment will follow with family.
In Peter's memory, donations can be made to the Dryden Regional Hospital Equipment Fund, Box 3003, Dryden, ON P8N 2Z6. Your consideration and generosity is deeply appreciated by his family.


Condolences may be posted at www.dcfh.ca