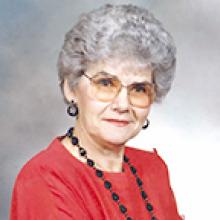 
Jean was born on February 18, 1931 in Moose Jaw, Saskatchewan then was fostered and adopted by Albert and Helena Klaassen on August 16, 1933. She lived happily with her new parents and brother, Harvey, in Maine Centre, Saskatchewan on a homestead. They eventually settled in Herbert, Saskatchewan where she attended Herbert High School and sang as the soloist in her 1950 graduation.
Jean enrolled to the nursing program at the Regina Grey Nuns' Hospital. She attended training for three years and was awarded the Bedside Nursing Medal at graduation. She worked in the Case Room for a year and then married Robert Malowski in November 1954. She then transferred to surgical unit 3D.
In 1956 Curtis Robert was born, 1958 Roberta Leah was born, 1959 Trevor Todd was born, 1961 Tracey Janet was born and in 1965 Blair Preston was born, completing the family. She worked part time and casual until 1961 when she commenced private duty nursing.
In 1971 the family moved to Winnipeg, at which time Jean took on a new role with the Tache Nursing Home. After a year of community-based work, Jean returned to acute care at St. Boniface Hospital to work Obstetrics and Gynecology for the next ten years. She grew tired of shift work and went to work at Mount Carmel Clinic for five more years then retired in 1985 which for her had been a very satisfying and rewarding career. Jean found other activities that brought her joy and satisfaction, such as paper tole creations, knitting, pottery, singing in the choir and attending bible study, endless reading and travel.
Happy times in her life included celebrating many joyous wedding anniversaries, seeing the family grow, travelling east and west coasts of Canada with multiple return trips to Victoria, the United States, down to the Florida Keys, United Kingdom, Europe, Cypress in the Mediterranean and finally her dream, Hawaii.
With happy times come sad, and this was the case when the family lost the first-born son/brother in 1992. Jean also mourned the loss of her husband, Bob, in 2019. Life lost some of its luster and Jean's health slowly declined over the next three years. Jean passed away peacefully, with family by her side, on November 19, 2022 at the Meadowood Manor Personal Care Home.
Jean is survived by children: Roberta, Trevor (Phyllis), Tracey (Rob) and Blair (Esther), grandchildren: Kimberley (Cory), Victoria, Mark (Kelley), David (Chelsea), Carly (Tristan), great-grandchildren: Elijah, Zachary, Halle, Logan, Luke, Axel, Finn and Amelia.
We wish to acknowledge the caring and attentive services of all the attendants at Meadowood Manor Personal Care Home where Jean spent her last six months and her remaining time with family.
A memorial service will take place at 1:00 p.m. on Thursday, November 24, 2022 at Faith Lutheran Church, 1311 Dakota St.