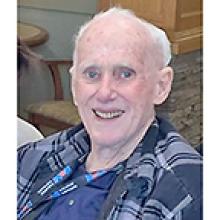 
It is with deep sadness that we announce the passing of our dear father, Umpa, father-in-law, and friend.
Barry passed away at 11:11 a.m. on Friday, November 11, 2022 at the age of 90 years. It is fitting that he departed our world on a Friday so that he could celebrate Rye Day Friday with mom and all of our family and friends in heaven.
Barry was born on August 15, 1932 in Brandon, MB to Dorothy and George Waller. Barry and his big brother Gregory (Bud) spent their childhood in Lenore, Carberry, Brandon and Dauphin where dad met his soulmate Elizabeth (Bette). Mom and Dad were married on September 24, 1952 and began their family in Winnipeg raising their three children, Brenda (Ken), Richard (Val), and Colleen (Darryl).
In 1968 the family moved to Gimli where Barry soon became very involved in the community with the Knights of Columbus, curling, and forming the Gimli Muskalungs Diving Club. He was employed by the Manitoba Highways Department but spent his free time land surveying, traveling to various diving events and island destinations, golfing, and enjoying a good cigar. One could say that Barry found more pleasure searching for lost golf balls while puffing on a cigar than the actual game of golf.
The family's annual sunrise Hecla golf outing and backyard gatherings will be remembered fondly for years.
Barry found great joy in his grandchildren, Garth (Jenn), Nathan, Meaghan (Shawn), Matthew (Kelsey) Dylan (Sofia), Jessie, and Devon; and great-grandchildren, Noah, Rylie, Liana, and Dustin.


Of all the gifts you have given us,
we treasure most the memory of all the
special times we have spent with you.
We love you and will miss you so much,
rest in peace Umpa.


Special thanks to the staff at Sturgeon Creek 2 Retirement Residence, Grace Hospital and Victoria Hospital for the excellent care Dad received and special thanks to Father Art.
A service to celebrate Barry's life will be held at a later date.
In lieu of flowers, donations can be made to Cancer Society, Alzheimer's society or charity of your choice.