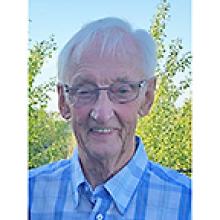 
It is with great sadness that the family of William (Bill) Strachan announce his passing on Monday, November 21, 2022 at the Health Sciences Centre at the age of 85.
Bill leaves behind his loving wife of 61 years, Sylvia Strachan (nee Phill); children, Laurie Strachan of Vancouver, Rick (Nicola) of Nottingham, England, Angela Hayward (Brian) of Anaheim Hills, California, and Chris (Wendy) of Winnipeg.
Also surviving Bill are his grandchildren, Courtney LaRoche (Bobby) of California, Hayley Invancoe (Carlos) of Mexico, Holly Strachan and Megan Strachan of England, Connor Strachan and Liam Strachan of Winnipeg; great-granddaughter Luna Invancoe-Tapia of Mexico, sister Pat Currie (Don), brother Bob Strachan (Marilyn), sister-in-law Doreen Bryk; brothers-in-law, Donald Bryk, David Phill, and Brad Phill; nieces and nephews and dear friends. Bill was predeceased by his parents, Albert and Isabella Strachan; sisters, Margaret Gibb and Eileen Didluck; and son-in-law Shane Invancoe.
Bill worked for the City of Winnipeg Transit Department for 37 years, retiring in 1992 as Assistant Superintendent of Maintenance. He was liked and respected by his co-workers. Bill was a hard-working man and was always there to give a helping hand. He enjoyed reading and loved discussing planes, cars, and the Great Wars. Politics was another topic Bill would never shy away from and often expressed his options in the most colorful terms. Bill loved to drive, and many road-trips were made across Canada, to California, and other parts of the US. Holidays were spent in Hawaii, the UK, and Texas. When not traveling, holidays were spent initially at Spruce Sands and later in their RV at Buffalo Bay where Bill could often be seen flying over the waves in his boat. Bill loved to fish even though Sylvia usually caught the most fish. His most memorable vacation was at Woodland Beach, Ontario where the entire family gathered for a week of "Water Olympics", card playing and generally having a great time.
Bill and Sylvia were dedicated to their children, attending countless hockey, soccer, baseball and ringette games, Ukrainian dance rehearsals and concerts, to name a few. Bill never missed an opportunity to see his children perform, come hell or high water.
After retirement, Bill and Sylvia spent 19 winters in Pharr, Texas, where they made many lifelong friends. Bill enjoyed playing shuffleboard, golfing, and most of all, sitting on the shore at Padre Island.
When not vacationing in Texas, Bill could be seen at any one of his grandchildren's sporting events in places as far away as BC and California. Bill enjoyed participating in curling, carpet bowling and lawn bowling. He enjoyed an occasional round of golf with work buddies and later with his brother Bob and friends.
At Bill's request, there will be no formal service. Cremation has already taken place.
Special thanks to the doctors and nurses at Urgent Care, Victoria Hospital and Health Sciences Centre Emergency Ward for their compassionate care during Bill's brief stays and to Dr. T Babick for his excellent long-term care.