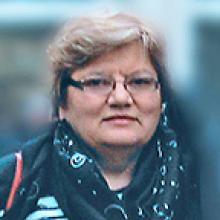 
It is with great sadness that we announce the passing of Olga Runnalls of Narol, MB on November 15, 2022, at the Selkirk Regional Health Centre, after a long battle with cancer.
She is survived by her loving husband of 50 years, Bill Runnalls and nieces Shirley Briault (Ken) of Drumheller, AB and Marlene Sul (Cliff) of Winnipeg.
Olga was predeceased by her parents, Lillian, and Fred Kostiuk; brothers, Mike (Nellie), John and Walter.
Olga was born in Gilbert Plains, MB on January 2, 1944, and was raised on the family farm near Grandview. After completion of High School, she moved to Winnipeg. There she met the love of her life, Bill, and they were married in Gilbert Plains on September 30, 1972.
She worked for Labour Canada for many years, starting as an entry-level clerk and ended her career as a Labour Affairs Officer, one of the first women in Canada to attain such a position.
Olga and Bill travelled frequently over the years, including many trips to Europe. River cruising was a particular favourite.
In 1999 Olga decided to retire to a large rural property to indulge her gardening passion. She grew a very large vegetable garden as well as many well-manicured flower beds. Habitats for insects and birds were always part of her gardening plans. She was active in several related groups such as the Herb Society of Manitoba and the Transcona Garden Club.
Olga's other great passion was music; she was a subscriber of the Winnipeg Symphony Orchestra for over 40 years, and she was very active in the Volunteer Committee of the WSO, serving a term as President.
Cremation has taken place. No service will be held at this time, but a gathering is planned for next spring or early summer.
Many thanks to the doctors and staff of CancerCare and Selkirk Regional Health Centre. The care that Olga received was exemplary.
If you desire, contributions in Olga's memory can be made to the Winnipeg Symphony Orchestra Endowment Fund, Nature Conservancy of Canada, or to any other charitable fund.