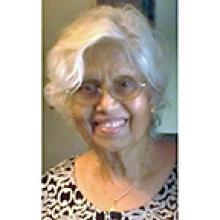 
It is with great sadness that we announce that Juliana (Julie) passed away peacefully at the age of 92, with family by her side.
She is survived by her children Maureen Penko, Judith Rigby, and Gerard D'Souza (Donna); eight beautiful grandchildren, Lauren Penko (Brandon Watson), Stephen Penko, Jordan Rigby (Lee Howard), Sierra Rigby (Travis Schrader), Aidan Rigby, Nicole Taylor, and Luke and Priya D'Souza; great-grandchild Wynona Watson; and sister Agnes Gonsalves.
She was predeceased by her loving husband Benjamin James Salvador (2014) and her second child Mary (1957).
Juliana was born in Bangalore, India to John and Florence Fernandes and was the oldest of four children. She was respected and valued by those she worked with in a career that spanned three countries: an accomplished educator, teaching drama and math in Jamshedpur, India; working at British Tobacco and Game Reserves in Dar es Salaam, Tanzania, Africa; and as an Executive Assistant to the Brigadier General, Royal Canadian Air Force Base, 17 Wing, Winnipeg, Manitoba (retired 1998).
Juliana and Benjamin were married for 60 years, sharing a love for family, faith, tradition, travel, the cultural arts, and community. Juliana earned the respect and love of everyone she encountered in her passion for sports, fitness, and learning, earning a Business Diploma at University of Winnipeg. She will be fondly remembered as an active member of the Catholic Women's League, the Women Business Owners of Manitoba, and the Pan-Am Pool. Juliana had a contagious spirit and smile that drew people to her and will be remembered for her kindness, gratitude and being an extraordinary lady. In all aspects of her life, these qualities made her a role model for her children and grandchildren.
A very special thank you to the staff at Misericordia Place Unit 1 for their wonderful care and compassion.
Funeral Mass will be celebrated on Friday, December 9, 2022, at 11.00 a.m. at Saint John Brebeuf Church, 1707 John Brebeuf Place, Winnipeg, MB. Livestream available at www.sjbcommunity.ca.
In lieu of flowers, donations may be made to Alzheimer Canada or the Misericordia Health Centre Foundation Inc.