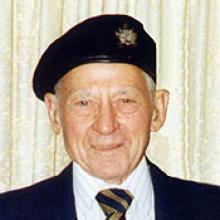 NOEL CANTIN On Saturday, September 24, 2005, Noel Cantin passed away peacefully at the hospital in McCreary. Noel was predeceased by his parents, Julienne and Amidee Cantin; his sister Marie, and seven of his brothers. He is survived by his wife Bernice; brother Albert (Madge); daughters, Lois (Alistair Callegari), Vivian (Martin Law), Joan (Randy Brydges), Roxanne (Jean-Louis Maguet); and his grandchildren, Shawn, Scott, Philip, Michael, David, Kimberley, Katherine, Aurele, Celeste and Denelle. Noel was born in McCreary, MB, on December 23, 1920, the third youngest of nine children. At the age of 19, he joined the Fort Garry Horse and served in Second World War, landing in Normandy on D-Day. He was injured twice and received many commendations. Noel married Bernice in 1948, and they raised four girls. Noel was a wonderful, loving and caring family man. The focus of his life was his family, and everything he did was for them. He was completely unselfish in everything he did. Noel was also a very active community person, being involved with many clubs and activities. Including starting up a volunteer fire department, leading army cadets, Chamber of Commerce, ski club, and Rotary. He never left things for someone else to do, just quietly and modestly got things done. Noel enjoyed skiing, tennis, golf, sailing, and jogged daily until his health no longer permitted it. The highlight of his life in his later years was spending time with his 10 grandchildren, whom he loved dearly. Noel was greatly loved by family and friends, and will always live on in our memories. Prayers were held at Our Lady of the Nativity Roman Catholic Church in McCreary on Monday, September 26 at 7:30 p.m. Mass of celebration will be held at Our Lady of the Nativity Roman Catholic Church in McCreary on Tuesday, September 27 at 2:00 p.m. with a family tribute prior to mass at 1:30 p.m. Interment to follow at the McCreary Catholic Cemetery. Father Paul Tinguely as Celebrant. Flowers are gratefully declined. If friends so wish, donations may be made to the McCreary-Alonsa Personal Care Home, Box 250, McCreary, MB R0J 1B0, or to the McCreary-Alonsa Health Centre, Box 250, McCreary, MB R0J 1B0. Dobchuk-Anderson Funeral Home of McCreary in care of arrangements. Telephone (204) 835-2004