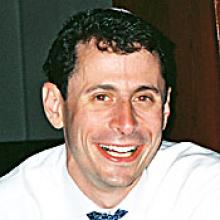 ADAM JOEL ANHANG (1973 - 2005) Adam Anhang passed away tragically in San Juan, Puerto Rico on Friday, September 23, 2005 at age 32. He leaves behind his parents, Abe and Barbara Anhang, and his grandfather, Tully Uster, of Winnipeg, his sister and brother-in-law, Becky and Matthew Price of Boston, and countless friends, associates, and loved ones all over the world. Adam was born and raised in Winnipeg. He attended the Talmud Torah elementary school and Joseph Wolinsky Collegiate. He began his undergraduate studies at Yeshiva University in New York, becoming the executive editor of the student newspaper and a competitive member of the fencing team. He completed his undergraduate degree at the Wharton School of Business, and over the years, returned to Wharton often to give guest lectures about real estate. Adam loved to teach, and had hoped to make teaching a big part of his work in the future. Adam's business career reflected his entrepreneurial spirit. In his mid-twenties, after working for a couple of New York real estate firms, Adam went out on his own, starting a consulting business in which he helped companies in different industries recover from dire financial straits. He was often called in to take on the CFO or CEO roles, and in recent years, served as the CEO of CWC, a company that sells software to online gaming sites. In the past few years, though, the vast majority of Adam's time was spent working on large and complicated real estate projects that were slated to revitalize neighbourhoods in Puerto Rico. Helping people with their problems was one of Adam's major occupations. Adam was always the first person who people called when they had an emergency or needed serious advice. Since his death, dozens of friends and acquaintances have come forward to report that Adam quietly paid for something they couldn't afford or flew to see them when they were ill or needed a friend. Adam's life was also full of adventure and humour. He loved travel, scuba diving, costume parties, practical jokes, and the antics of his two cats. His bright mind, generous spirit, and quick wit will be profoundly missed. An online tribute to Adam is located at www.adamanhang.com. Donations in his memory can be made to the Adam Anhang Memorial Fund at the Jewish Foundation of Manitoba, Suite C400-123 Doncaster Street, Winnipeg, MB R3N 2B2, http://www.jewishfoundation.org/.