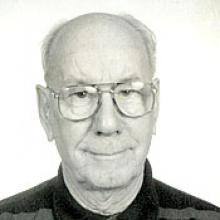 JOHN EDWARD PULLEN It is with deep sadness that we announce the passing of our much loved husband, father, grandfather, great-grandfather, John Edward Pullen on October 2, 2005 at the Grace Hospice after a lengthy and courageous battle with cancer. John is lovingly remembered by his wife of 54 years, Winnie and their children, David (Janet), Joan (Ray), Carol, Diane (Tom) and Janet (Rob); grandchildren, Michael (Monique), Jonathon (Tarana), Audrey, Theresa, Matthew, Michelle, Ryan, Lauren and great-grandchildren, Katlyn, Drexler, Tyson, Josh, Ethan and Emily. John will be missed by his dear friend Tom; sister Peggy; nephew Stephen; niece Linda, their families, numerous relatives in England, many friends and his little dog Harley. He was predeceased by his mother Selina in 1982. John was born in London, England on September 4, 1926 and was a veteran of the Second World War. He met the love of his life, Winnie in 1948 and they wed in 1951. They immigrated to Winnipeg in 1957 in search of a better life for their family. John was a journeyman electrician and was happy to have a job even if it meant working outside or up north on the dew line. Prompted by a strong desire to improve conditions for the working people, John became active in the trade union movement and in 1960 he was elected business manager of the International Brotherhood of Electrical Workers Local 2085. John was passionately devoted to the social democratic movement and continued to work in the trade union as President of the Building Construction Trades Council, a brief stint as an electrical inspector with the provincial government's mechanical and engineering division before moving on to the Manitoba Government Employees Association as the Assistant Executive Director of Negotiating Services in 1976 and later the Director of Operations until his retirement in 1989. John was Vice President and later President of the Manitoba Federation of Labour from 1977 to 1984. He received many awards for his lifetime of work and achievements including the Province of Manitoba's Order of the Buffalo Hunt, Canada's 125th Commemorative Medal, Cesar E. Chavez Black Eagles Award and the Stanley Knowles Solidarity Award from the Manitoba NDP. John and Winnie enjoyed their retirement years with trips abroad, fishing with Uncle Bill, relaxing at Chesley's and many family get-togethers. Never one to stop giving John continued to work at the Labour Board, the Pension Review and several years as President of the Manitoba Government Retired Employees Association. John was a dedicated, hard-working man but he was also a fun-loving, gentle and generous man devoted to his family and friends. We cherish fond memories of our childhood camping in the Whiteshell with family friends and Christmas was always a special time as John delighted in decorating the house and tree and spoiling his family with treats and gifts galore. Special thanks to the doctors, nurses and numerous caregivers at the Grace General Hospital and Grace Hospice for the wonderful care and compassion they provided to John and his family over the past many months. A memorial service and celebration of John's life will be held at 11:00 a.m. on Friday, October 7 at Transcona Funeral Chapel, 1800 Day St. with luncheon to follow at the Royal Canadian Legion, Transcona Branch, 117 Regent Ave. E. In lieu of flowers, a donation may be made to the Grace Hospice, 260 Booth Dr., Winnipeg, or to a charity of your choice. God saw he was getting tired, and a cure was not to be, So He put His arms around him, and whispered, Come with Me . With tear-filled eyes we watched him, suffer and fade away, Although we loved him deeply, We could not make him stay. A golden heart stopped beating, hard-working hands went to rest. God broke our hearts to prove to us, He only takes the best. Transcona Funeral Chapel in care of arrangements.