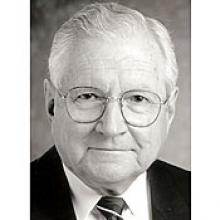 LT. COL. R. G. SMELLIE, CD/QC The death of Robert Gordon Smellie on September 29, 2005 at Victoria Hospital, Winnipeg, brought to a close a lifetime of service to community, province and country. That life began in 1923 at Russell, MB, where Bob received his elementary and high school education. The service began when he interrupted his education at Brandon College and enlisted in the Canadian Army to serve in the Second World War. Within weeks of surviving the D-Day landing at Juno Beach in Normandy,Bob was wounded and evacuated to England for treatment and recovery. Officer training followed, and he received his commission as a Lieutenant. Returning to Canada after the war, he completed his interrupted education and married his fiancee, Lois Cochrane of Silverton, who became mother of their three daughters. After obtaining his law degree, he acquired a legal practice in Russell. Several years later, he joined the Aikins MacAulay firm to practice law in Winnipeg. While still in Russell, Bob was elected to the provincial Legislature and served a period as Minister of Municipal Affairs with the Duff Roblin government. Bob subsequently chaired a provincial boundaries commission and, after retiring from the practice of law, served as chairman of the Municipal Board of Manitoba. Bob maintained a close relationship with his wartime regiment, the Royal Winnipeg Rifles and, in 1986, was appointed Honorary Lieutenant-Colonel of the regiment. His service in the community included volunteer work at the Deer Lodge Centre, and with organizations like the Heart Foundation and the Manitoba and Canadian Bar Associations. After many years of membership and leadership at various levels with the Royal Canadian Legion, his service there reached a pinnacle in the early 1970s when he presided as Dominion President. Bob joined the Canadian Corps of Commissionaires in 1978 as a governor of the Manitoba Division. Serving in various provincial and national offices led to his selection as National Chairman in 1995. After 20 years of service, the Corps awarded him its highest honour, a Distinguished Service Medal. In 2003, he was awarded a Queen's Jubilee Medal. Predeceased by his parents, George and Jessie Smellie of Russell and Winnipeg, Bob is survived by his wife of 25 years, Jean and her daughter Penelope (Paul) Inksetter; his first wife Lois and their daughters, Susan (Tsugio) Kurushima in Victoria, Carol (George) Gamby in Winnipeg and Linda (Doug) Gage in Calgary; and grandchildren, Carmen and Brad Kurushima, Christopher and Andrew Gamby and Scott and Graham Gage; and great-granddaughter Emily Gage. Also surviving are Bob's sister Patricia Partaker of Winnipeg; and brothers, George (Taisia) of Winnipeg and Logie (Dorothea) of Esterhazy, SK, as well as numerous nieces, nephews, great-nieces and great-nephews. Cremation has taken place, and a memorial will be held in the Minto Armoury, St. Matthews Ave., Winnipeg at 7:00 p.m., October 18. In lieu of flowers, friends wishing to make tributes are encouraged to make donations to either Royal Winnipeg Rifles Trust Fund, 221-5445 Roblin Blvd., Winnipeg, MB R3R 3W7 or to First Presbyterian Church, 61 Picardy Place, Winnipeg, MB R3G 0X6. WOJCIK'S ALL BELIEFS FAITHS FUNERAL CHAPEL CREMATORIUM 897 - 4665