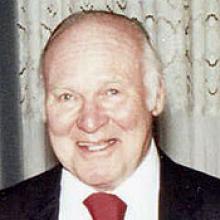 GORDON ELLWOOD JOHNSTON October 15, 1920 - November 7, 2005 Passed away in Winnipeg on November 7, 2005 at the age of 85 years. Gordon was predeceased by his first wife, Myra Campbell Johnston; infant brother Glen and son-in-law, Dennis Fielder. Left to mourn are his loving wife, Maria Johnston; sister Gwen Johnston; brother Doug (Alice) Johnston; children, Carol-Lee Heighington, Lynda Fielder, Norma Johnston, Joan (Craig) Farncombe, Brad (Kathy) Johnston, Reed (Fay) Johnston, Joemar Johnston, Maria (Donie) Johnston and Gordon Johnston, Jr. (Gordie) as well as 12 grandchildren and 11 great-grandchildren. Gordon was born in Portage la Prairie on October 15, 1920; he attended the Portage Collegiate Institute. During the Second World War, he was Sergeant Pilot of the 77th Royal Air Force Squadron, serving in the United Kingdom, and from 1943 to 1945, as a prisoner of war in Stalag 344 Germany, he became the British Man of Confidence for 300 fellow prisoners. On his return to civilian life, he worked as a life insurance underwriter for Manufacturer's Life Insurance Co. before joining the Portage la Prairie Post Office staff from 1948 to 1952, then as a private business man he developed and operated Johnston's Solo Store. Also during this period he started his political career and became an Alderman for the City of Portage la Prairie from 1959 to 1962, he was subsequently elected MLA for Portage la Prairie and retained his seat until his retirement in September 1977. From 1966 to 1968 he served as Executive Director of the Liberal Party of Manitoba and from 1969 to 1977 he held the office of House Leader. In 1978 he was appointed Manitoba's Citizenship Court Judge serving 2 three year terms and retiring in 1984. From 1984 to 1998 he presided as a Marriage Commissioner for the Province of Manitoba. A life member of the Liberal Party of Manitoba, he was a former member of the Elks Club, the Portage Rotary Club, the Portage Golf Club, the Portage Flying Club and the Royal Canadian Legion #65. One of Dad's greatest pleasures was the time spent at Delta Beach with his family and friends. Public viewing (Lamay) will be held on Thursday, November 10 from 6:00 p.m. to 12:00 p.m. with Prayers being said by Rev. Sr. Diosdado Parrenas at 9:00 p.m. at Cropo Funeral Chapel, 1442 Main Street, Winnipeg, MB. Service of Remembrance will be held on Saturday, November 12, at 1:30 p.m. at McKenzie Funeral Chapel, 56 Royal Road S., Portage la Prairie, MB. In lieu of flowers, donations may be made in Gordon's memory to the Canadian Diabetes Association or to a charity of your choice. CROPO FUNERAL CHAPEL 586-8044