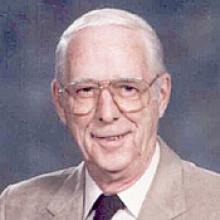 JOHN WILLIAM (BILL) ARBUTHNOT SR. With his wife Isabel, daughter Adele and grandson Tommy by his side, Bill Sr. passed away on Thursday, October 6, 2005, at age 88, after a lengthy battle with cancer. Bill is survived by his wife Isabel (Derrien) of 63 years, children, Adele (Ed), Michael (Caroleen), Lynn (Ray), Bill Jr., grandchildren, Tommy, David, Kristina, Jason, Jordan, Maryn, John, Derek, Justin and Stephen, sister Beverley, extended family Marty Catellier, Betty Arbuthnot and Deborah Metcalfe and many great-grandchildren. Bill was predeceased by his daughter Melanie (1996), brother Graham (2000), sister Margaret (2000) and his parents, John Arbuthnot and Theresa McDonnell. Bill was born January 24, 1917 in Victoria, BC and moved with his parents to Winnipeg at a very young age where he spent the majority of his life until moving in 1977 to the West Coast for retirement. Bill's work years were spent in the electronics business as the owner and manager of Arbuthnot Audio Electronics. Many Winnipeg musicians started their recording careers in the recording studio on Tache Avenue in St. Boniface. Bill's love of music continued his entire life and he would spend many hours in the basement at Rosewarne Avenue or Labieux Road. with anyone else who would listen. Bill took great joy in providing the sound system for each float for the T. Eaton Co. Santa Clause parade for many years. Bill always had an avid interest in telephones and his collection of antique phones was a great joy to him. Summers were spent at the cottage at Hillside Beach, where Bill's fancy scrambled egg breakfasts on weekends were famous in the family. Cremation has taken place and a family gathering to celebrate Bill's life was held in Nanaimo, BC.