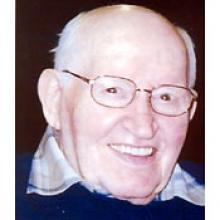 HENRY GEORGE BEES Peacefully on December 3, 2005, Henry, surrounded by his loving family at Deer Lodge Centre, passed after a brief illness. He leaves to mourn in his passing his loving wife of 59 years, Irene; daughters, Katherine Turner and Karen Parisien (Dave); sons, Bill (Rosie) and Ken (Kathy). He leaves 11 grandchildren, Lesley (Ron), Nicole (Gary), David, Kelly, Matthew, Clayton, Kristy, Tara, Laura, Ellen, Karen and one great-grandchild Ben. His sisters, Margery Alcock, Liz Spencer and his brother Bill (Corrine), and numerous nieces and nephews. He was predeceased by his mother and father and his sisters, Beverly Dyke and Katherine Furness. Henry was born April 4, 1920 in Neepawa and lived in several small towns in Manitoba including Angusville, Russel and Lac du Bonnet. In 1941 he enlisted in the R.C.A.F., flying 13 missions over Europe before being shot down in 1943. He was a P.O.W. and was liberated in 1945. In his families eyes Henry was a true war hero, to Henry it was just the right thing to do. Dad returned to marry the love of his life, Irene, and begin their journey together. Henry worked at several jobs before starting his long career in the drycleaning business including Peerless, Whitehall, Perths and Valley Cleaners. He was passionate about sports, his family, his friends and especially his grandchildren, one in particular Tara who he had a very special bond with. After retirement he enjoyed golfing, walking his dog Misty, volunteering at the Cheer Board and socializing with his many new friends at Colorado Estates. Henry was truly the heart of the family. For those who were lucky enough to know him, he brought joy into their lives with his infectious smile, quick wit and caring ways. Henry died a modest man, and a true gentleman. Special thanks to all the staff on seventh floor at Deer Lodge, especially Cindy, Kim and Diane, as well as Pastor Michael Kurtz. Heroes come in every shape and size Most are labelled that by what they do. Through the eyes of a grandchild, My greatest Hero...... Is you. Goodnight grandpa, love you, until we meet again. Love Tara A memorial service will be held on Wednesday, December 7 at 11:00 a.m. at First Lutheran Church, 580 Victor St. A reception celebrating Henry's life will follow the service in the church's hall. Flowers are gratefully declined. If desired donations can be made to the Christmas Cheer Board or the charity of one's choice. Thomson Funeral Home in care of arrangements 783-7211.