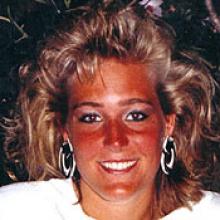 LORILYN VAN ELSLANDER To all our friends and relatives, Accidentally and tragically, it is with great sorrow and heavy hearts we announce the passing of our beloved Lorilyn on Saturday, December 10, 2005. She was born Lorilyn (Diana - Baptism name she shared with her big sis) on a beautiful sunny day September 14, 1967 at St. Boniface General Hospital in Winnipeg, MB and came home to 608 Linden Ave. to join her big sister Leonette (Tokyo, Japan), Mom (Peggy) and Dad (Norm) for one year before the family moved to Dunkirk Drive. After two years little brother, Todd Norman joined the family, and that was when she started her Mother role. She attended Norberry School with big sis before it became French Immersion and then moved to Hastings Elementary. After completing grade six she moved over to St. Mary's Academy until graduation 1985 under the direction of Sister Susan. It was here she established her best friend, Christine (Pound) Del Bigio and they graduated together with Father Sam officiating. Continuing on to the University of Manitoba for a BA she subsidized her income with employment at Superstore, Tony Roma's and other restaurant ventures. It was then she announced her desire to own and operate a restaurant. During this time she purchased her own condo and ventured on her own but never too far from Dunkirk Drive and her summers at Twin Lakes Beach and the Garden. During this episode of her career, Darlene (Ness) joined Todd in marriage June 1998 to complete the family. It was Lorilyn's love of gardening that caused all her pots and buckets on her patio for the fresh herbs used at the restaurant. She successfully completed 12 years as General Manager at the Medicine Rock Cafe, however, was currently looking for a different venue. Today she found one. With much love, your special friend, Nancy P.S. She will be joining some very special souls, Mom and Dad's friend, Eva Ostrom 2003 friend and Twin Beach neighbour, Tony Gaudes 2005, her Mom's friend Lorraine's son Dave Halliday-Campbell 2005, maternal grandparents Gladys 1996 and Monte (Pop) Banks 1999, fraternal grandfather Alex (Pet) Van Elslander 1991, special Auntie Elsie Victor 1988 and most important Nana Angela (Nellie) Van Elslander 1974. What a bright precious gift Some gifts must be returned sooner than others. Funeral Mass will be held at 2:00 p.m. on Friday, December 16 at Holy Family Roman Catholic Church, 778 Archibald St. A private family interment will take place at a later date. The Desjardins Funeral Chapel in care of arrangements, 233-4949 or toll free at 1-888-233-4949.