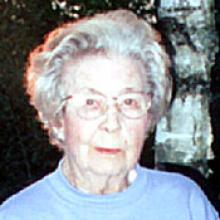 MILDRED JESSIE CAMPBELL January 25,1911 - January 10, 2006 It is with great sadness the family announces the passing of Mildred Campbell on Tuesday, January 10, 2006 at the Riverview Health Centre. She leaves to cherish her memory, brother Bruce Miln of Victoria, BC; granddaughters, Kimberley and Karla Hamelin; son in-law Roger Hamelin; as well as nieces and nephews, all who will sadly miss her. Mildred was predeceased by her loving husband of 58 years, Dr. Gordon Campbell; son Donald; and daughter Lynn; also by brothers, Gordon and Wilf Miln. Mildred was born in Winnipeg, MB in 1911 to James and Maud Miln. She was raised in River Heights and later graduated from Kelvin High School. During her youth Mildred was a very accomplished accompanist, playing in many competitions and recitals. In 1936, she married Dr. Gordon Campbell. Shortly thereafter, they moved to China, where her husband taught dentistry at Western Union University in Cheng Du. They spent seven memorable years in China. While growing up Mildred spent many summers at Victoria Beach and then later at her family cottage at Falcon Lake, MB. She took great pleasure in entertaining many functions both at her home and cottage. Mildred will be remembered as a kind and out-going lady who found great joy in traveling, playing bridge, knitting and volunteering at various charitable organizations, such as a past president of VON. As a mother and grandmother, she was very giving of her time and took an active interest in her granddaughters interests and achievements. At this time, the family would like to extend their heartfelt thanks to all the staff on CD4 at the Riverview Health Centre for their most kind and compassionate support. In lieu of flowers, donations may be made to the Riverview Health Centre, #1 Morley Ave., Winnipeg, MB R3L 2P4. A memorial service will take place on Friday, January 13, at 2:00 p.m. in the Worship Centre at the Riverview Health Centre, #1 Morley Ave. with the Reverend Dr. Glen Horst officiating. Cremation has taken place, and a private interment will take place at a later date. The Coutu family in care of arrangements: E.J COUTU CO. FUNERAL DIRECTORS 680 Archibald Street 253-5086