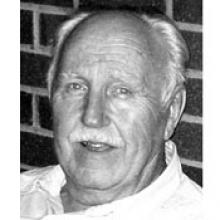 FRED SMITH On January 12, 2006, Dad finished his work, put away his tools, and took his rest. The gentle heart that loved his family above all else stopped beating. Dad was born in Winnipeg on July 21, 1924 and happily spent his entire life here. He was predeceased by his parents, Ernest and Pauline Smith, and his only sibling, Walter. In addition to his immediate family, he is survived by numerous in-laws, nieces, nephews and dear friends. Dad was proud of earning the professional designation of CMA and of doing a good and thorough job as a career public servant with the federal and provincial governments. Much of his work and interest involved education and aboriginal affairs. His ethics, integrity and loyalty earned him the respect of his coworkers. The fact that some kept in touch after his retirement, and attended his 80th birthday party in 2004, demonstrated the high regard in which they held him. Dad was humbled and honoured by this gesture. However his life did not centre around his work. Family was his first priority. To the rest of the world, Dad was an accountant; the polite and unassuming man who never spoke an unkind word about anyone. To his wife Jean, he was the lanky youth she met in third grade who became the handsome airman that literally swept her off her feet one night at the roller rink. He was the loving partner of 58 years with whom she built a home, a family and a life. To daughters Jo-Anne Doerksen, Danita Brisson, Leslie Dawson and Nancy Lipinski, he was Doggy Daddy, who could settle any dispute, answer any question and solve any problem. He was both our rock and our tender heart. To sons in-law Gerry Doerksen, Roger Brisson, Dave Dawson and Mike Lipinski, and to many other young men, he was a surrogate dad, a confidant, a source of wisdom and the man with more tools than God who could help them build anything. To his grandchildren Bryan and Kevin Doerksen, David Gaden, Sandra and Jennifer Schmidtke, Laura and Scott Dawson and Sarah and Katie Lipinski, he was the cool grandpa who listened to their stories as though they were the most important matters of state, picked the sodas with the interesting sounding names, attended all their dance recitals, sports games and graduations, and watched Star Wars movies with them. To his newest grandchildren, Christie and Adam Brisson, he was the man who accepted and loved them without hesitation, who was eager to draw them into his family and get to know them. He called them his best Christmas present ever. They say the greatest gift a man can give his children is to love and honour their mother, and this, our father did. On the rare occasions that they were apart, he was lost without her. They sustained each other through the good and bad times and always parented as a team. He loved being a grandpa, and derived enormous pride and joy from the antics and accomplishments of all his grandkids. Dad could talk to anyone but more importantly, he listened to everyone. He lived his convictions but was not judgmental of others. His religious beliefs were intensely personal but his Christianity was clearly demonstrated through his every action. He had the soul of an artist and seldom left home without his camera. Through his sketches and photography he depicted the natural beauty that he so loved. Not surprisingly, his favourite subjects were his wife and children. Thanks for the boxes and boxes of photos Dad, and the memories that go with them. We invite friends and family to a celebration of Dad's life at 3:00 p.m. on Wednesday, January 18 at Chapel Lawn Funeral Home, 4000 Portage Ave. In lieu of flowers those who wish may make a contribution in Dad's memory to the charity of their choice. CHAPEL LAWN FUNERAL HOME CREMATION AND RECEPTION CENTRE 885-9715