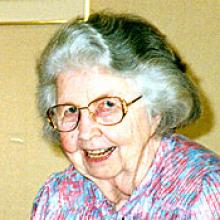 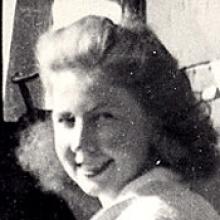 GURO EMILY JACKSON (1915 - 2006) Emily died peacefully April 5, 2006 following a brief illness. She is survived by her sons, Jim (Wendy) and David (Tracy); grandchildren, Noah, Rory and Montana; brother Carl Kummen (Florence); sister Marion Johnsen of Maryland; sister-in-law Vange Kummen; and many nieces and nephews. She was predeceased by her parents, Carl T. Kummen and Mary Emilia Kummen (nee Olsson); husband James A. Jackson; her sister Alice McKinnon; and brother Harold Kummen. The eldest of five children, Emily attended Kelvin High School and the University of Manitoba before commencing work at her father's company Kummen Shipman Electric. With the end of the Second World War, she happily took on the role of full-time mother and housewife. Later she worked with and retired from the Lake Shippers Clearance Association. A longtime resident of Oxford Street, Mom delivered Meals on Wheels, contributed to many charitable organizations, and spent many happy hours playing with her grandchildren, chauffeuring and visiting shut-in friends. She spent a short but pleasant time at Assiniboine Links and later moved to West Park Manor, a very caring home. A memorial service will be held on Monday, April 10 at 2:00 p.m. in Thomson In the Park Funeral Home, 1291 McGillivray Blvd. with Chaplain Ken Perry officiating. Special thanks to all of the warm and supportive staff at West Park Manor. Flowers gratefully declined, if friends so desire a donation may be made to the Alzheimer's Society of Manitoba or a charity of your choice. THOMSON IN THE PARK FUNERAL HOME CEMETERY 1291 McGILLIVRAY BLVD. (BETWEEN PEMBINA WAVERLEY) 925-1120