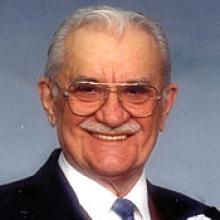 NIKOLA MATHEW ZUNIC (1921 - 2006) Nick passed away on April 6, 2006 after a brief illness, at the age of 84. He was predeceased by his parents, Magdalena and Nikola Zunic and his wife Flore (Jacques). He is survived by his son Michael of Calgary (Sharon); daughter Barbara (Louis); grandchildren, Michelle (Nathan), Stephen, Christine, Dominique; and his sister Madeline English of California. Nick was born on April 12, 1921 in Prilisce Dolnje, Croatia, Yugoslavia. His family immigrated to Canada in May of 1933 and settled in Winnipeg. He attended Immaculate Conception and Norquay Elementary schools, Aberdeen Junior High and St John's Technical High School. He entered the University of Manitoba Arts and Science Faculty in September 1939. His studies were interrupted in 1942 when Nick enlisted in the Royal Canadian Air Force during the Second World War. Nick served as a navigator with the 419th Squadron in England and received an honourable discharge in September 1945 with the rank of Flight Officer. He then resumed his studies at the University of Manitoba and graduated in May 1950 from the faculty of Architecture. Nick designed many churches, schools and private homes in the St Boniface area and in northern Manitoba. He remained interested in sketching, architecture and politics well into his retirement years. The family wishes to thank the staff at Deer Lodge Centre for the great care they gave Dad these past three years. We would also like to thank the staff in the Emergency Department and the 3rd floor at the Grace General Hospital. A private service was held on April 11 at the Desjardins Funeral Home at 357 DesMeurons St. In lieu of flowers, donations can be made to Doctors Without Borders. The Desjardins Funeral Chapel in care of arrangements, 233-4949 or toll free 1-888-233-4949.