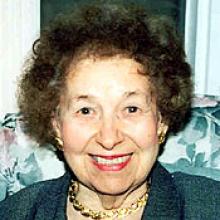 ISABEL WEIR PEARSON (nee MILLER) Widow of Francis Edward Penrose Pearson It is with deep sadness we announce the passing of Isabel on April 17, 2006 at the Concordia Hospital after a brief illness. She was 88 years of age. She was predeceased by her husband of 52 years, Frank; twin sons who died at birth; brothers and sister, Robert, Christine and David. She is survived by her nephew David, his two children and many members of the extended family. Isabel was the youngest of four children of Robert and Christine Miller. She was the only child born in Canada. Her parents arrived from Glasgow, Scotland in 1913. In the early years she attended school in East Kildonan and graduated from St. Mary's Academy. Summers were spent at the family cottage at Victoria Beach or traveling with the Miller Clan. After graduation she worked for several years at the Empire Brass Manufacturing Company and the Great West Coal Company as the secretary to the president. It was during this latter period that she met Frank, the light of her life. During her early years of working Isabel became active in two particular organizations, Jephthah Chapter 22 Order of the Eastern Star in 1940 where she ascended to chair and became Matron in 1962; she also joined Althea Shrine #2, Order of the White Shrine of Jerusalem, where she was charter and a life member of this group. Isabel was a member of the East Kildonan Kiwanis Ladies' Section. Isabel and Frank's 50th anniversary was celebrated in Stonewall and was one of the highlights of the twilight years of their lives. In the summers they enjoyed spending time at their cottage at Clearwater Bay, Kendall Inlet; where upon the adventure of sailing on the lake with Frank created many hours of fun and enjoyment. For many years they wintered in Hawaii. The family wishes to extend a thank you to the staff of 3 East of the Concordia Hospital for their compassionate care of Isabel during her illness. A memorial service will be held on Thursday, April 20, 3:00 p.m. at Glen Eden Funeral Home with interment and reception to follow. Rev. Bill Miller of Knox United Church officiating. In lieu of flowers donation may be made to the Canadian Diabetes Association. Arrangements entrusted to: Glen Eden Funeral Home 4477 Main St. 338-7111 Family and friends are invited to sign the Book of Condolences at www.gleneden-mb.ca