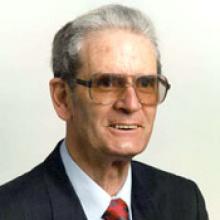 GILBERT BURCH With great sadness the family announces the passing of Gilbert (Gib) Burch on April 7, 2006 after a long and courageous battle with Parkinsons. He passed away peacefully with family at his side at Fischer Place Nursing Home, 100 Mile House, B.C. Dearly missed by his children, Karen (Cliff) McMillen, Carol (Ron) Burfoot, Diana (Murray) Beckett, Wanda (Larry) Giesbrecht and Brent. As well as 16 grandchildren: Kristen, Ryan; Erin, Brandon, Lyndon, Arlyn, Evan, Caitlyn; Tyler (Candace), Ashleigh, Matthew; Cara, Brittany, Andrea, Tammy; and Grant. Predeceased by his wife, Audrey; parents, William and Margaret; triplet brother, Frederick Burch (April 2, 2006); triplet brother, Ernest; and brothers, William and Thomas. Gilbert was a member of the Church of Christ. Born on February 25, 1927 and raised in St. James, MB, he started out as a coffee grinder but wanted to be an artist. He secured employment at Viacom (formerly Universal Signs and Claude Neon) for 46 years as a commercial artist. He is remembered for his beautiful paintings including that of his beloved Audrey. He was also commissioned and completed the painting of Queen Elizabeth II that hung in the Winnipeg Arena. He will always be remembered for his gentle spirit and love and devotion for his wife, children and grandchildren. He was an excellent provider, role model and teacher and always had time for family whether travelling, camping, skiing, ice skating, canoeing, swimming or playing baseball. Thank you to Dr. Wendland who took such genuine care of our Dad and our family. Deepest thanks to the staff of Fischer Place who made Gilbert a part of the family there. A graveside memorial will be held at a later date. Donations may be made to The Parkinson Foundation of Canada, Winnipeg Chapter, 302-171 Donald St, Winnipeg, MB R3C 1M3.