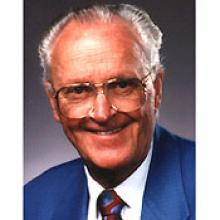 THE HONOURABLE DUNCAN JAMES JESSIMAN Q.C. Quietly and with dignity, Duncan passed away, on Wednesday, April 19, 2006 in Vancouver, BC. Duncan is survived by Alix (Perrin), his loving and caring wife of 27 years; and his children, Duncan (Colleen Crawford), Robert (Sally Kendall) and Sally (Arnold Ostevik). 'Big', as he was affectionately known, will also be missed by his devoted grandchildren, Duncan (Tressa Main), Patrick, Shauna, Ryann (Phil Doucette), Scott, Robin, Joe and Julia. Big was a loving caring father and grandfather always there to support and love his family. It made him very proud that all of his children were university educated and active professionals in their communities. He was born in Winnipeg, MB on June 5 1923, to parents, William and Rubina (Ruby) Jessiman. He was predeceased by his mother when he was 9 years old and subsequently by his father and brothers, William, Tom and John and he is survived by his youngest brother Harvey. At age 16, Duncan left home and went west to fight fires in British Columbia. His Aunt Ret and Uncle Dunc then convinced him to come home and stay with them and go back to school. They made him realize the importance of education. At the age of 18, he joined the Royal Canadian Navy as a midshipman. He served in the coastal forces in Canada, the United Kingdom and France. He served with the 29th Canadian Motor Torpedo Boat Flotilla and was part of the Allied liberation of Europe, participating in D-day, June 6, 1944, and in operations on the French, Belgian and Dutch coasts. This was dangerous duty. He survived the destruction of his squadron at 0stend in 1945. He was honourably discharged as a Lieutenant RCNVR in August 1945. After his service he continued his commitment to lifelong learning as he worked to obtain his law degree. After he obtained his law degree, he went back and obtained his arts degree and then later his LLM and then went on to teach in the post graduate program at the law school. He started practicing law in 1948, when he joined with Arthur Johnston, the firm eventually becoming Johnston, Jessiman, Gardner and Twaddle. In 1971 that firm joined with Pitblado and Hoskin where he became a partner and in 1998 he joined Aikins, MacAulay Thorvaldson where he continued his practice until 2005. He was appointed Queen's Counsel in 1959 and appeared successfully before the Supreme Court of Canada on four occasions. He was a lifelong member of the Progressive Conservative Party of Canada and became a senator in 1993. He took great pride on the work he did in the Senate with the Special Committee dealing with the Pearson Airport Agreements, the Standing Committees on Fisheries and Oceans; Legal and Constitutional Affairs; Social Affairs, Science and Technology; the Sub Committee on Veterans Affairs; and the Joint Committee on Child Custody and Access. In addition to politics Duncan's commitment to the community involved his participation in the Rotary Club of Winnipeg where he became President, the University of Winnipeg, where he became Chairman of the Board of Regents; he was a founding member, chairperson of the board and member of the executive committee of the Victoria General Hospital Research and Services Inc.; in addition he was a member of the advisory boards of Rainbow Stage and the Canadian Arthritis Society. In business he was equally successful where he was a driving force in the creation of a number of entities listed on the Toronto Stock Exchange. These entities included Service Corporation International Canada, Geocrude Energy, Pan Cana Resources and RIMOIL where he served as chairman and Enerplus Resources where he was a director. He also served as a director of Air Canada. In Winnipeg, through Progressive Holdings he was involved with many investments involving among other things, land development. The development of Linden Ridge with others was one of its larger undertakings. Through his community involvement, political associations and business interests, there were not many places he didn't travel to, however his best times were visiting the far flung reaches of Canada and getting to know and gain a better understanding of the people. He always prided himself for having a goal, setting the agenda, being rigorously honest, being in control, giving ample consideration to all the details in complex matters, he had a very focused and strong mind. When needed he was always able to shift his truly incredible power of focus to deal with the required issue at hand, usually involving others. He was always determined and could always be relied on. His enormous strength, energy and the security of purpose was cherished by many, but in particular, his family members. He will be dearly missed by all. He was a member of the Manitoba Club and the St. Charles Country Club where he very much enjoyed matching wits with the Boys of Friday . For many years Duncan and the family spent summers enjoying the family cottage uniquely located on the isthmus between West Hawk Lake and Hunt Lake. A service in celebration of Duncan's life will take place at St. George's Crescentwood Anglican Church, 168 Wilton St. in Winnipeg on Tuesday, April 25 at 11:00 a.m. with reception to follow at the Church. Donations to CancerCare Manitoba, P.O. Box 2248, Winnipeg, MB R3C 4A6 are gratefully appreciated. Duncan was deeply appreciative of all his caregivers, especially Antonia and Merril and his dedicated wife and daughter. Condolences may be emailed to condolences@nbardal.mb.ca. One always knew where he stood on a matter. neil bardal INc. 949-2200