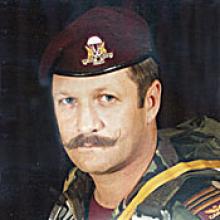 MICHAEL RAFFERTY Michael (Mike) Albert Lieutenant-Colonel, BA, CD, PLog Suddenly on Saturday, May 6, 2006 at the age of 58. Beloved husband of Leslie, and cherished father of Maggie. Much loved son of Bert of Winnipeg, the late Margaret Rafferty, and stepmother Dorothy, and dear brother of Timothy (Dorothy) and Patrick, also of Winnipeg. Dear son-in-law of Douglas and Margaret Littlewood, and brother-in-law to Jeffrey (Mary Jane) of Blenheim. Mike will be greatly missed by his nieces and nephews as well as his dear friends. Mike had proudly served in the Canadian Forces for 34 years, in Gimli, Comox, 1 Service Battalion in Calgary, The Airborne Regiment in Petawawa, The Canadian Forces School of Administration and Logistics in Borden, Parachute Maintenance Depot in Edmonton, 2 Service Battalion in Petawawa, in EUCOM HQ in Stuttgart and he was still serving in Ottawa at the time of his death. Mike was particularly proud of having been the Chief Petty Officer of RCSCC John Travers Cornwell V.C. in Winnipeg, and Commanding Officer of both the Canadian Forces Parachute Maintenance Depot in Edmonton and of 28 Service Battalion in Ottawa. A long time coach of girls' soccer in Cumberland, many will remember fondly the times they spent on the field with Coach Mike. Mike was a devoted family man, an exemplary officer and a true friend. He will be greatly missed. A memorial service was held Friday, May 12 at the Holland Armouries, 2100 Walkley Road, Ottawa. In remembrance, donations to the Ottawa chapter of the Heart and Stroke Foundation would be appreciated by the family. Kelly Funeral Homes were in care of arrangements.