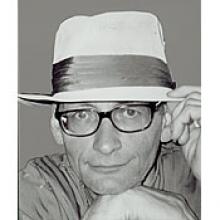 WALTER LEWYC March 16, 1946 - May 30, 2006 Walter was born in Gosler, Germany on March 16, 1946 and moved to Canada with his parents in 1948. He lived in Boyles Alberta, Windsor Ontario, Montreal Quebec and embraced Winnipeg as his home. Walter had a life long voracious appetite for art particularly visual contemporary art and avidly supported local artists in all cultural avenues. It was this appetite that served as a motivation for all activities in his life. Walter was a patron of the local art scene in Winnipeg and served as a mentor and net worker for local artists and galleries. Walter was a big supporter of Plug In gallery in the 70's and 80's actively promoting all new openings that took place. He became a singer in the band Mondo Trasho in part of a group effort to bring visual art to a wider audience. Walter and friends opened a late night restaurant called Lithium - a Depression Café that served a wide variety of clientele from artists, writers, musicians, prostitutes, university students and the curious. It provided an eclectic and inviting after hours meeting place for artists of all types to collect together to share ideas, and served as a venue for performance art shows and as a gallery for local and international artists to show case their works. For the past decade Walter ran Golden City a curio shop and sometimes gallery in China Town. Again, the shop served as a salon of sorts and as another venue to support local artists through show casing original works. He was much beloved by a wide circle of friends, each of whom will have precious memories of special moments shared with him. Walter will be missed by his partner Jill, mother Mary, sister Pat, brother Robert, cousin Mila, nephew Thomas, and his mother Eileen, cousin Dima, brother in law Michael, and relatives in Russia, Ukraine, and Poland. Walter was a deeply concerned humanitarian and cared profoundly for all beings lost or homeless. He had a special benevolence for some individuals near his shop and always believed there was a place for everyone. In lieu of flowers and gifts - please make a donation to The Main Street Project, 75 Martha Street, R3B 1A4 or support a local artist of your choice by purchasing an original artwork in his memory. Cremation has taken place and a memorial service will be held on Saturday, June 3, 2006 at 1:00 p.m. at Knysh Funeral Chapel, 1020 Main Street. Thanks to Palliative Home Care Service, and St. Boniface Palliative Care team, and his personal physician, and oncologist at CancerCare. Knysh Funeral Chapel 582-0973