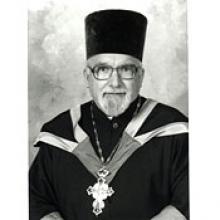 VERY REVEREND TYMOFIY MINENKO Priest, husband, father, grandfather, scholar, mentor. All describe the life of the Very Reverend Tymofiy Minenko who was called on Tuesday, May 30, 2006. Very Rev. Tymofiy Minenko was born March 5, 1929 in Brovarky, Poltava, Ukraine into the family of Semen and Paraskevia Minenko. In 1949, the family immigrated to the United States of America. In 1952, he married Anastasia Krywonos in New York City, and in 1955 was ordained to serve the Ukrainian Orthodox Church. He is survived by his wife Anastasia and four sons: Mark (Roma), Victor (Connie), Michael (Anne) and Paul (Barbara). He was also grandfather to Andrew, Sofia, Daniel, Sonia, Matthew and Nicholas. Also surviving him is his sister Anna and her children Catherine and Andrew. Fr. Tymofiy's religious studies began at the Theological Academy of the Ukrainian Orthodox Church in Munich, Germany and continued at St. Vladimir's Seminary in New York. He also studied at City University of New York and is an alumni of Brock University, ON. In 1984, he was awarded a Master of Divinity degree from St. Andrew's College in Winnipeg. Fr. Tymofiy's pastoral work included parishes in New York City, Toronto, Grimsby, Waterloo and Winnipeg. From 1975 to 1985 he served as editor of the Ukrainian Orthodox Church of Canada's newspaper - Visnyk. For his work, he was awarded his mitre in 1988 and was made a protopresbyter in 1999. He was involved in many church matters including being a member of the Church Court and Committees of the Ukrainian Orthodox Church of Canada. As a student and a young priest, Fr. Tymofiy became very involved in Ukrainian student and youth organizations in Germany, the United States and Canada. He passed on his love and knowledge of Ukraine through this involvement and by teaching at the parish schools at each of his parishes. Inspired by his teaching, many students became actively involved in the Ukrainian community. Fr. Tymofiy's love of teaching continued in Winnipeg when in 1978 he was appointed a professor of liturgics and church history at St. Andrew's College. In 1985 he was appointed Dean and served in this capacity until 1995. His involvement in the community included serving as a member of the Secretariat of the World Congress of Free Ukrainians, chairperson of Trident Press and as a member of the Ukrainian Free Academy of the U.S.A. and of the Order of St. Andrew. While Fr. Tymofiy authored many essays and articles over the years, the family was particularly proud when he recently published his first book on the Orthodox Church in Ukraine during the Second World War. At the time of his passing he had completed books on the Ukrainian Orthodox Church in the 20th Century and the Kievan Metropolia through the Ages. In his latter years, Fr. Tymofiy's greatest joy was his six grandchildren. Whether it involved listening to a grandchild's story, attending a piano or ballet recital, or flying at a moments notice to assist with the grandchildren in times of need, Fr. Tymofiy enjoyed his role as grandfather. He took great pride in every accomplishment of all his young grandchildren. The family would like to thank the doctors, nurses and staff of the Emergency and Surgical Intensive Care Units at the Health Sciences Centre for their expert and respectful care for Fr. Tymofiy. He will be missed and forever remembered by his wife Anastasia and family. Services will be held at 6:00 p.m. on Friday, June 2, 2006 at Holy Trinity Cathedral. Interment to be at South Bound Brook, New Jersey. In lieu of flowers, please make a donation to St. Andrew's College in Winnipeg. CROPO FUNERAL CHAPEL 586-8044