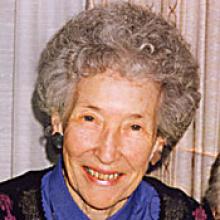 BETTY LOUSE BARKWELL September 8, 1917 - June 9, 2006 Betty passed away on June 9, 2006, at the Westpark Manor. Betty lived her life as a devout Christian. She was an eternal optimist always seeing the positive and bringing warmth to everyone she touched. Betty was predeceased by her husband Stewart, sister Doris and grandson Brian. Surviving Betty are her sisters, Audry and Connie, brother Ted, sons, Lawerence (Diana, David, Katrina), Vernon (Monique, France, Bruce, Shannon), Bryan, Bruce (Carol, Darcy, Cory), Robert (Nancy, Jessica, Sean, Christopher) and daughter Janet (Melissa, Rhoni, Gordie, Bryan). Betty was born in Calgary, AB to Ruth and Albert Newman. She went for one year of Teachers College after graduation from high school which allowed her to teach on the Rosebud Huterite Colony, in a one-room country school in Alberta. This first job helped her to pay for her Bachelor of Science Degree at the University of Alberta. While in her placement at a munitions factory in Peterborough, ON during the Second World War, she met Stewart, the love of her life. Stewart and Betty were married in Calgary in 1942. Their early married years were filled with births and travel; son one in Peterborough, son two in Calgary, son three in Toronto, finally settling down in Winnipeg where the last three children were born. While raising six children, Betty still found time to volunteer many hours at St Andrews United Church and at the River Heights Community Centre. Betty's favourite love was taking her kids to Caddy Lake in the Whiteshell every summer where she and Stewart became active in the West Hawk United Church. Other lifelong loves included bridge, square dancing / round dancing, gardening and the University Women's Club. In retirement Betty and Stewart continued giving; volunteering for Meals on Wheels in Winnipeg and tutoring hundreds of Hispanic students in English and Math in Pharr, TX, their winter home. Giving of herself to the end, Betty donated her body to medical Research at the University of Manitoba. A memorial service celebrating her life will be held at St. Andrews Church (at Oak Street and Kingsway), July 15 at 11:00 a.m., reception to follow. Flowers are gratefully declined, but donations in Betty's memory can be made to the Alzheimer's Society.