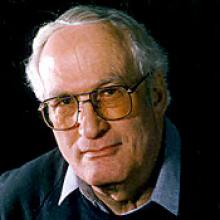 PERRY DIAMOND It is with a profound sense of loss that the family of Perry Diamond announces his death at the Sharon Home on May 23, 2006. Perry was born on July 1, 1921 to Tom and Sarah Diamond and was a lifelong resident of Winnipeg. He enlisted in the RCAF in 1941 and fought in North Africa during the Second World War as part of the 425 Alouette Squadron. As an aerial photographer on bombers he participated in the invasion of Italy and Sicily, concluding his service in Yorkshire, England in 1944. Following the War, he attended the School of Modern Photography in New York City. Upon his return to Winnipeg he set up Fredric Perry Photographers in the Time Building with his war buddy Fred Billows. In 1954, he moved the studio to the Odeon Theatre Building, where he spent more than 20 years with his second partner, Fritz Alkier. Over those years, Perry chronicled thousands of simchas' not only of the Jewish community but of all communities in the city. He photographed almost 5000 weddings and took portraits of the famous; Paul Robeson, Dale Carnegie, Jack Dempsey, Marion Anderson, Eleanor Roosevelt, Bob Hope, Irving Berlin, Mary Martin, Johnny Carson, Mordechai Richler, Izzy Asper, Trudeau, Chrétien, CEOs, world leaders, movie stars, musicians and most significantly the citizens of his beloved Winnipeg. He served on the executive board of the Professional Photographers of Manitoba for over 10 years including a tenure as their President. He was named an Honorary Life Member of both the PPAM and the Professional Photographers of Canada and received many accolades and awards for his beautiful work, most notably the Craftsman and prestigious MASTER of PHOTOGRAPHY citation in 1985. His work provides precious documentation of the generation in which he lived. Perry married his life partner Betty Hashman 50 years ago and they established themselves in River Heights where they raised their family and became an integral part of the community. He was predeceased by his parents and parents-in-law Ben and Bella Hashman, his sister Yvette (Charles Watson-Munro), brother Nate (Sara) and his twin brother Sam (Shirley). He is survived by his wife Betty, a resident of the Sharon Home and children, Tom (Alex Borovoy) and Pam of Toronto, Jay of San Francisco, grandchildren, Lindsay and Andrew Goeldner, sister Dorothy Smith and brother Les Diamond (Mim), sister-in-law Rose (Sam Arenson), nieces, nephews, cousins, friends and neighbours, all of whom have a special place in their heart for him. The day before Perry's death he attended the Bar Mitzvah of his grandson in Toronto. In attendance were many of the people whom he held most dear. We are indeed grateful to have had that opportunity to express our love to a man who lived life with respect for all, gentleness, generosity, compassion, humour and kindness. Funeral services were held on May 26. Donations may be made to the Jewish National Fund or the charity of your choice. If so desired his family may be contacted at family@houseofdiamond.com or by visiting http://ptd.houseofdiamond.com.