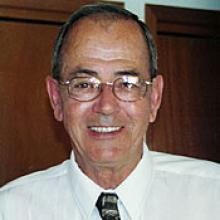 GERARD JOSEPH ARMAND REMILLARD December 29, 1941 - August 21, 2006 Peacefully, after a courageous battle with cancer, Jerry passed away at the Lake of the Woods District Hospital in Kenora, ON. Jerry leaves to cherish his memory, his wife of 42 years, Donna; daughter Cathy (Dale); grandchildren Ryan and Carly; son Dave (Jo-Ann); sisters Jeannette and Lucille (Duke) and brother Marcel, as well as numerous nieces, nephews and friends. Jerry was born and raised in old St. Boniface. He and Donna were married in December of 1963. He spent a short time with the Canadian Air Force in Toronto and then was employed by the City of Winnipeg Transit System as a Driver, retiring after 32 years of continuous service in February 2000. Jerry was a proud member of the Amalgamated Transit Union as well as the City of Winnipeg Retirees Association. Jerry and Donna retired to the family cottage at Laclu, ON in the spring of 2003. He enjoyed spending time with his family, as well as keeping busy with many small projects around the cottage, playing cards, and was meticulous when it came to grass cutting and snow blowing. It was his passion! The family would like to express their deepest thanks and appreciation to Dr. Brent Schacter and the team of physicians, nurses and technicians of CancerCare Manitoba for their expertise and compassionate care. We would also like to extend a special thanks to the nursing, pharmacy and support staff of the Treatment Room as well as the entire staff at HSC GD6. We would also like to extend our gratitude to Dr. Brian Bowerman and the entire team (emergency, 2 East and 3 East) at the Lake of the Woods District Hospital. Many thanks to the CCAC Kenora and to the Com Care nurses. A special thank you to Jan Lansiedel for her support and for being there. Cremation has taken place. A service celebrating Jerry life will be held on Tuesday, August 29 at 2:00 p.m. at Windsor Park United Church, 1062 Autumnwood Dr. in Winnipeg. In lieu of flowers, donations in Jerry's memory can be made to CancerCare Manitoba Foundation, 675 McDermot, Room ON1160, Winnipeg, MB. R3E 0V6. Family Owned and Operated KNYSH FUNERAL CHAPEL 582-0973