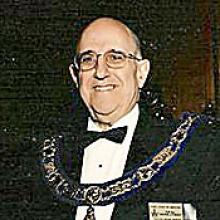 GEORGE JOSEPH FORZLEY After a brief illness, George Forzley, beloved husband of Barbara, passed away on September 1, 2006 at the age of 71. Besides his loving wife Barb of 47 years; George is survived by his children, Daniel, Gordon (Penney), Dianne (Darren); grandson Mike; nieces, nephews and their families. He was predeceased by his parents, Samuel and Kareemy. George was born in Winnipeg on March 15, 1935. He graduated from Daniel McIntyre High School in 1952. After spending the summer as a counsellor at YMCA Camp Manitou, George started work with the City of Winnipeg and retired in 1991 after 38 1/2 years of service. George joined Ancient Landmark Lodge No. 3 in 1958 becoming Worshipful Master in 1968. He served as lodge Secretary for five years and was on various other committees. George's greatest Masonic honor was serving as Grand Master of Manitoba from June 2005 to June 2006. As well as the Masonic order, George was a member of the Scottish Rite, Past President of the Khartum Komedians, a Past Associate Grand Guardian and Past Associate Bethel Guardian of Bethel No. 9 of the International Order of Job's Daughters, and a former Boy Scout Cub Leader. He also volunteered as a driver for the Masonic Cancer Driver Program for six years and Winnipeg Harvest for two years. The family would like to thank Dr. Lage and the staff at Concordia Hospital for George's care during this difficult time. In lieu of flowers, donations can be made the charity of one's choice. A memorial service will be held at 2:00 p.m., Thursday, September 7, at Charleswood United Church, 4820 Roblin Blvd. A Masonic service will be included at this time. NEIL Bardal inc. 949-2200