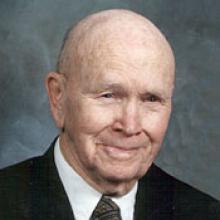 DONALD W. WILTON 1916 - 2006 It is with great sorrow the family announces the peaceful passing of Donald, at home on Saturday, September 9, 2006. He leaves to cherish his memory his sons, Bruce (Linda) of Winnipeg and Fred (Pat) of Edmonton; his daughters, Barb (Ken) of Carman and Beth of Winnipeg; his grandchildren, Stephen (Jan), Carolyn and Richard of Calgary, Kim (Kyle), Teri and Chris of Winnipeg and Brianne and Loreena of Edmonton and his beloved great-grandsons, Caleb and Sam. He will also be missed by his brother Arklos (Irene) of Carman and Margaret Wilton of Edmonton as well as numerous nieces and nephews. His beloved wife and best friend, Shirley, predeceased him in 2005. He was also predeceased by his parents, William A. and Velma Wilton; his brother William Claire (in infancy); his sister Mildred and her husband Alex; his mother and father-in-law Clare and Fred Bond and his brother-in-law Dave Bond. Don was born in Roland, MB on October 18, 1916. He attended school at Utopia and Roland. He received a Diploma in Agriculture (1939) and later, a Bachelor of Science in Agriculture (1946) from the University of Manitoba. After spending his first twenty-nine years on his father's farm, he and his new bride Shirley moved to Minnedosa, where he worked for the Manitoba Department of Agriculture from 1946-1949. In 1949 he began working for Manitoba Pool Elevators, transferring to Winnipeg in 1953. He spent the remainder of his working years with the Pool, retiring in 1980. He was so very proud of his years in the agriculture industry, where he worked for and with the farmers of his home province. Retirement, though, brought Don and Shirley a more casual life with time for family, church, gardening, travelling and extended periods at the family cottage on Lake of the Woods. Don was a man of many talents and we have all learned so much from him over the years. He loved working with his hands and was always busy with projects at home and at the cottage. He was the family gardener, and cared lovingly for his flowers, especially his begonias. He was a carpenter, electrician, painter or plumber depending on what task needed to be done. Over the years, he built many a kitchen and rec room, even building an entire boat with his sons. Even as his physical abilities declined in his later years, his mind remained sharp and he was proud to see his children take over with skills he had taught them. He lovingly cared for Shirley through ill health for years before her death in 2005 and he missed her deeply until the day he died. Together they had researched the Wilton family genealogy, even travelling to England to find information. They published an original version of The Wilton Family Tree as well as updates. They were truly soul mates for their entire married life and an inspiration to all of us. A memorial service will be held at Trinity United Church, 933 Summerside Ave. in Fort Garry at 1:00 p.m. on Wednesday, September 13 with Rev. Milly Malavsky and Don's nephew, Rev. Eric Matheson officiating. A private family graveside interment will take place at Roland, MB, where he will be laid to rest beside his wife. If family and friends should desire, in lieu of flowers, donations may be made to the Children's Hospital Foundation, 501-840 Sherbrook St., Winnipeg, R3A 1S1 or to a charity of choice. Doyle's Funeral Home, Carman, in care of arrangements.