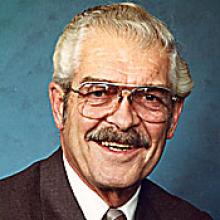 WILLIAM DONALD BALDWIN, B. Arch., MAA, FRAIC, HFAIA August 7, 1925 - October 1, 2006 W. Donald Baldwin passed away peacefully at home in Winnipeg, MB. Don will be lovingly remembered by his wife Marie; his children David (Mara), Lethbridge, AB, Jayne (Allan), St. Charles, IL, Kirk (Judith), Winnipeg, MB, Aynsley, Winnipeg, MB and James (Atsushi), Tokyo, Japan. His eight grandchildren, Zach and Madeleine Baldwin, Caitlyn and Ian Scales, Mariah, Samuel and Jeremy Baldwin and Joshua Nixon will dearly miss him; as will his sister Betty and brother-in-law Oscar Housen of Unity, SK. Don was a very special uncle to his several nieces and nephews. His parents, Arthur and Helen, and his sister Gwen Baldwin, preceded him in death. Don was born into a railway family, in Wilke, SK, and grew up in Springside, SK. In 1950 he received his B. Arch. from The University of Manitoba and married Marie, his wife of 56 years. He began his career in Hamilton, ON and returned to Winnipeg in 1957 as Chief Architect with Hudson's Bay House. He later joined the Winnipeg firm Green, Blankstein Russell Assoc. and became a partner of GBR in 1973. He practiced architecture for 40 years with integrity and creativity. Don served as president of the Manitoba Architects Association (MAA 1975-1976) and president of the Royal Architecture Institute of Canada, (RAIC 1977-1978). While RAIC president Don was able to combine his love of travel and work as he and Marie attended provincial conventions across the country and in England. Don served with the Royal Canadian Air Force and belonged to the Wartime Pilots and Observers Association. Don was a skilled carpenter and loved to work on their cottage at Lake of the Woods where many wonderful summers were spent with family and friends. In retirement Don travelled with Marie, enjoyed their many friends and returned to golfing and curling. In celebration of his life, a mass will be held on Thursday, October 5 at 1:00 in St. Ignatius Church, 255 Stafford St (at Cordyon Avenue), Winnipeg, Manitoba. Private interment to take place in Lake of the Woods Cemetery, Kenora, ON. Don's family wishes to thank the many dedicated staff of CancerCare Manitoba and the WRHA Palliative Care Program for their wonderful care and support. In lieu of flowers, donations can be made to Cancer Care Manitoba Foundation, 109 - 675 McDermot Ave., Winnipeg, MB R3E 0V9. THOMSON IN THE PARK FUNERAL HOME AND CEMETERY 1291 MCGILLIVRAY BLVD. WWW.THOMSONINTHEPARK.COM 925-1120