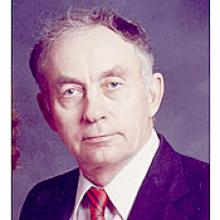 CLARENCE BAKER Peacefully, on Sunday, October 15, 2006 at the Beausejour Health Centre, Jesus led Clarence home to be reunited with his beloved wife Ilene. Left to cherish his memory are his five children: Corrine (Bill) Armstrong, Debbie (Keith) Litke, Andy (Jan) Baker, Curt Baker and Terry (Lori) Baker. He will be deeply missed by his 11 grandchildren: Maria (Greg) White, Gina and Teresa Armstrong; Colette (Jason) Lindstrom and Jared Litke; Drew, Reid and Riley Baker; Rhianon and Joel Baker; and Allysa Baker as well as his two great-grandchildren, Kevin and Nicolette Lindstrom. Clarence is also survived by his two sisters, Katie Kruk and Lil Schreyer and his brother Ed Baker as well as numerous brothers and sisters-in-law, nieces and nephews. He was predeceased by his wife Ilene in 2004, his sisters, Caroline, Marge, Elsie, Josie and Adeline, as well as several brothers-in-law. Clarence was born on the Baker homestead in Cromwell, MB to Anton and Pauline Baker on July 7, 1928. His early years of farming were lean ones, which led Clarence to work in the bush camps in winter in order to supplement the farm income. This was a blessing in disguise because it fortuitously led to Clarence meeting a beautiful young woman by the name of Ilene Weidman who was the cook at his bush camp. Not wasting any time, Clarence proposed a month later and they were married on September 22, 1951. They lived on the Baker homestead in Cromwell and raised their five children, working together to build the family farm. Clarence was a very progressive farmer and this was recognized when he was named Mr. Manitoba Farmer in 1984. He was very proud to be joined by two of his sons in the farming operation but one of his greatest pleasures was working alongside three of his grandsons, who are the fifth generation on the family farm. Clarence was a very community-minded person and was actively involved in numerous organizations. He was a councillor and the reeve of the R.M. of Brokenhead for many years, as well as the MLA in the Manitoba Legislature. He served on innumerable boards and committees, some of which included Manitoba Pool Elevators, Manitoba Crop Insurance, Beausejour and District Hospital Board, CPTC, Knights of Columbus, Beausejour Curling Club, Beausejour Lions Club and many more too numerous to mention, all possible because of the support of his wife who spent many years keeping the home fires burning. Clarence loved participating in sports and played baseball into his early 1960s, but his greatest passion was snowmobile racing, which incredibly, he didn't start until the age of 37. The last year of Clarence's life was spent at Stony Plains Terrace which was very fitting, as he was instrumental in its establishment. First and foremost, Dad loved his family and took great pride in his Baker's Dozen of grandchildren. He was a man who wasn't afraid to show his softer side and together with Mom taught his family what a loving relationship should be. In accordance with Clarence's wishes, cremation has taken place. Prayers will be held at St. Mary Roman Catholic Church, Beausejour on Wednesday, October 18 at 7:00 p.m. Funeral Liturgy will be held on Thursday, October 19 at 10:00 a.m., also at the church with Rev. Fr. Owen Steeves presiding. There will be a private family interment. In lieu of flowers, donations in Clarence's memory may be made to the Parkinson Society Manitoba, 302 - 171 Donald Street, Winnipeg, MB R3C 1M4. SOBERING FUNERAL CHAPEL CREMATORIUM, Beausejour 268-3510 or MB Toll Free 1-877-776-2220