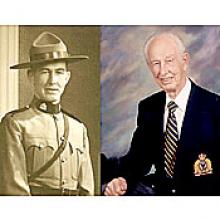 ALEXANDER HAROLD CLARK (1919 - 2006) Peacefully at the Grace Hospital on Tuesday, November 14, 2006. Predeceased by his wife of 60 years, Maxine. Dad leaves to mourn his three children, Gerald (Linda), Kathy (Bob), Randy (Debbie); five grandchildren, Scott and Cindi, Laurie and Barb, and Carly; and seven great-grandchildren, Hunter, Carson and Maguire, Adam, Devonny, Noah and Joel. He is also survived by his sister Vera (Wally); brother Ronald (Emma), and a large extended family. Dad was born June 30, 1919 in a log home on the NW¼ 27-48-1 W, in the community of Lily Plain, SK, near Prince Albert. The third of five children and the eldest son of Ivy and Alex Clark, he attended Lily Plain School to the end of Grade 8 and finished Grade 9 by correspondence. He was very proud of the fact, that with so little formal education, he joined the R.C.M.P. in 1940 and rose to the rank of R.C.M.P. Sergeant. He had been stationed in Rockwood, ON, and Regina, Strasbourg, Fort Walsh, Maple Creek, Wood Mountain, and Weyburn, in Saskatchewan, where he met the love of his life, Maxine Winnington-Ingram. They wed on May 5, 1945. After a brief stint in the Army Provo in the Second World War he rejoined the R.C.M.P. and was stationed in Ottawa, ON, followed by Portage la Prairie, Beausejour, Oak Point, Winnipeg, Selkirk, and Brandon, in Manitoba. After retiring from the Mounties in 1964 (as a Sergeant in Brandon), he settled in Winnipeg for a second career, becoming Manitoba's Supervisor of School Attendance, and then Supervisor of Private Schools. He was appointed a Commissioner for Oaths in 1965. In 1967, Mom and Dad bought the first of three cabins at Victoria Beach, MB which they enjoyed with family over a 25 year period. Dad was appointed Justice of Peace for Victoria Beach in 1967. Dad retired from the Manitoba Civil Service in 1981. He and Mom lived a short time in Summerland, BC, returned to Winnipeg for a few years, and finally found their niche in Oak Bay, Victoria, BC where they lived for nearly 20 years. This they referred to as their Island in the Pacific . Dad was involved in many organizations and he was on the executive of most of them. He was at different times in the Lions, Kinsmen, Manitoba Government Employees Association, a life member of the Manitoba and Victoria R.C.M.P. Veterans' Associations, Victoria Newcomers, Canadian Club, Masons, Victoria Beach Club, the vestries of too many Anglican churches to name, and the board of the Condo Corporations they resided in. Dad loved to curl (Pembina and Wildewood in Winnipeg, then Oak Bay). Of course he was always the skip! At age 82 he published the book The Unpaid Second Man which was reviewed in MacLean's and several other publications. As long as he was able, he championed the cause of most R.C.M.P. widows by trying to change the shameful way they have been treated by the R.C.M.P., even to this day. Dad used to say he could talk to anyone in Western Canada and within minutes discover a common acquaintance, which he proved over and over again. In 2005, surrounded by family and friends in Victoria, Mom and Dad celebrated their 60th Anniversary. We lost Mom in Victoria just before Christmas 2005, and Dad moved back to Winnipeg in the spring of 2006, where he resided at Tuxedo Villa Personal Care Home, to be closer to family. He recently travelled to Lily Plain to celebrate the 100th anniversary of his father's immigration to Canada. The event was attended by over 100 family members. He proudly marched behind the piper, and then stood to deliver the Robbie Burns Grace for the dinner as family Patriarch. A celebration of life will be held at St. Paul's Anglican Church, 830 North Drive at Point Road, Winnipeg on Saturday, November 25, 2006 at 11:00 a.m. Cremation has already taken place and interment with Mom at the R.C.M.P. Training Academy (Depot Division) cemetery at a later date. In lieu of flowers, donations may be made to the Heart and Stroke Foundation of Manitoba, 200 - 6 Donald St., Winnipeg, MB R3L 0K6. Arrangements in care of Thomson in the Park Funeral Home and Cemetery, 1291 McGillivray Blvd., Winnipeg, MB R3T 5Y4. Phone: 925-1120 www.thomsoninthepark.com