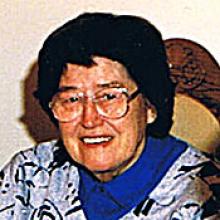 MARJORIE PURANEN (nee MACINTOSH) December 21, 1917- January 2, 2007 Marjorie Catherine Puranen, beloved mother and grandmother, after a long and courageous battle passed away at 89 years of age, with her family at her side. She is survived by two sons, Jack (Jacqueline), Dennis (Julia); four grandchildren, Kristian (Annelies), Travis, Serena and David; her sister Vera; nephews, Gordon (Eleanor), Don (Carol); great-nieces, Lisa (Sean), Leslie (Pat), Sheldon, and a great-nephew Tristan. She was predeceased by her husband Ernest; her parents Jack and Marion MacIntosh; sister Irene and Wilfred Summach, and brother-in-law Gene O'dell. Mother was born in Rosetown, Saskatchewan and raised in Zealandia, Saskatchewan. She worked in a munitions factory in Ajax, Ontario during the Second World War. She met and married Dad after the war and settled in Stratford, Ontario, moving to Transcona in 1955. Mom was a loving mother and grandmother who will be sadly missed. She spent her time as a homemaker raising and catering to her family. We had a lot of laughs playing many types of board games, Krokinhole, Skip Bo and for many years she did the Jumble and sent it in to the Winnipeg Free Press, even winning the first prize once. Mom was an excellent speller and loved games like Spill and Spell and Upword. After dad died in 1993, Mom continued to live at home until her health failed her. Park Manor became her new home where she was treated with the greatest of respect and love. Many thanks to Dr. Mercier and the special staff at Park Manor Personal Care Home, their care and compassion was so greatly appreciated by mom and her family. At her request cremation has taken place. There will be no service and a private interment will take place at a later date. Flowers are gratefully declined. If you so choose please make a donation to the Alzheimer Society, or Park Manor Personal Care Home, or a charity of your choice. FUNERAL ARRANGEMENTS IN CARE OF WHEELER FUNERAL CHAPEL 211 REGENT AVE. WEST 224-1525