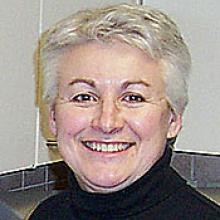 BETTY STORIE (nee EMBURY) She died too young. Betty was a strong and healthy wife and mother before she was diagnosed with terminal brain cancer, at the age of 52. She continued to battle until the morning of March 7, 2007, when she succumbed peacefully with her husband Jerry and children Lindsay and Benjamin at her side. Betty was born in Baldur, Manitoba, in 1952, lived her formative years in Estevan, Saskatchewan, returning to Baldur in 1969, where she met, fell in love with and married Jerry. In the early years of their 37-year marriage, Jerry and Betty lived in Brandon and Winnipeg, where Betty worked at the Bank of Montreal and the Agricultural Credit Corporation, supporting Jerry through his university degrees. After moving to Flin Flon in 1975, they began creating their family with Lindsay, born in 1976, followed by Benjamin 15 months later. Each summer, with two small children in the back of their station wagon, Betty and Jerry would visit her parents in B.C. - family ties were always important to Betty. While in Flin Flon, Betty explored her creative talents reporting for the CBC and writing articles for the Flin Flon Reminder, and showed her entrepreneurial spirit by starting a local newspaper. Early on, Betty and Jerry began a working partnership that would last through many projects. With Betty's knowledge of electrical wiring, superior planning skills, and her ability to read manuals - something her husband would never master - they built an addition on to their mobile home, completely renovated their first home, and re-finished the basement of their last home in Flin Flon, as well as their future homes in Winnipeg and Killarney. Betty was the consummate politician, although she wouldn't practice that skill herself until she ran for the NDP in a by-election in the Turtle Mountain Constituency in June 2003. That didn't stop her from getting her husband elected as the NDP MLA for Flin Flon in 1981. She was his constant companion, support, and sounding board. Her common sense, and commitment to her family, led her to convince Jerry to move the family to Winnipeg in 1983, after Jerry joined the Cabinet. In 1983, Betty began her own academic career and completed her B.A. in 1986 and B.Ed. in 1988. Betty taught for a short time in the St. Vital School Division, before embarking on another adventure as a small business owner. Ever thorough, after tireless research and planning, she chose to start a business that best reflected her philosophy by starting the environmentally-conscious Tree Huggers Diaper Service. Within two years, she had established the second largest diaper service in the city. In 1994, Jerry and Betty moved back north to Cranberry Portage, where Betty reconnected with her longtime friends, and made some new ones, in northern Manitoba. In 1998, Jerry and Betty moved to Killarney, Manitoba, where Betty rediscovered her creative side and joined the Killarney Guide as a reporter. While in Killarney, Betty developed a great reputation as a responsible journalist, covering contentious local issues with tact and intelligence. Her articles appeared in other local papers and the Brandon Sun. Betty was the inspiration behind the founding of the Killarney Area Donors Choice, which rationalized canvassing, significantly increasing donations to a variety of charities. Betty loved the information super highway. She utilized this tool to solve any ailment, argument, or Trivial Pursuit issue for the education of herself and those around her. Any friend, family member, or passing acquaintance could count on receiving an email essay on their problem of the day. She had a sense of community responsibility. While living in the North, she served on the Board of the Manitoba Red Cross and was a frequent blood donor. She also served on a Fort Garry School Division Task Force, as parent representative, while living in Winnipeg. In 2000, Betty was appointed to the Board of Governors of Brandon University. Over the next six years, she made a difference to Brandon University and in the fall of 2006 was recognized by the Board for her contributions. Betty is survived by her husband Jerry; children, Lindsay and Benjamin; mother Irene Embury; brothers, Mervyn (Peggy) and Barry (Lani); sister Lois (Terry); mother-in-law Iris Storie; brothers-in-law, Ken (Bev), Grant (Carol), Tim (Debbie); and sister-in-law Donna (Dave); and many loving nieces and nephews, friends and colleagues. Thanks to her many friends from across the country who offered kind words and practical support. The family would also like to thank the team of CancerCare van drivers, the staff at CancerCare in Winnipeg and Brandon, Marilyn and Linda who were friends and companions, and the wonderful staff at HomeCare and the Assiniboine Centre. Betty had so much talent and ability that she could have done almost anything, but she always chose to put her family before her own dreams and ambitions. She loved her family, and her family loved her. We love you, dear. A celebration of her life will be held on Saturday, March 17, 2007, at 4:00 p.m. at the Victoria Inn, 3550 Victoria Ave., Brandon, Manitoba. In lieu of flowers, please make donations to the health charity of your choice or the Brandon University Foundation.