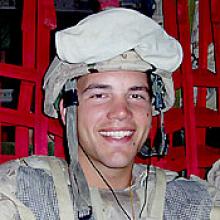 PTE. LANE WILLIAM THOMAS WATKINS On July 4, 2007, in Kandahar Province, Afghanistan, at the age of 20 years, while serving with Princess Patricia's Canadian Light Infantry. Lane was born in Winnipeg, MB, June 5, 1987, the third child of Charles and Wanda Watkins, a brother for Andrew and a twin to Leigh. He was raised in Clearwater, MB, surrounded by a loving and supportive extended family and community. He attended nursery and elementary school in Clearwater, junior high at Thomas Greenway in Crystal City and graduated from Pilot Mound School in 2005. He enjoyed the freedom of small town life, spending much time outdoors with his brothers and friends, playing hockey, baseball, hunting and fishing. Lane pursued his lifelong goal of becoming a soldier right after finishing school - leaving for basic training in St. Jean, QC, in August 2005. His first posting was to Edmonton where he was stationed with 3PPCLI. He was deployed to Afghanistan February 18, 2007. Funeral services will be held Monday, July 16 at the Clearwater Sports Park, 11th St. North, Clearwater, MB, at 11:00 a.m. In case of inclement weather, the service will be held in the Clearwater Skating Arena, 11th St. North, Clearwater, MB. Lane made many friendships during his time at 3PPCLI. He respected his fellow soldiers and cared deeply for their families. In lieu of flowers, please make a donation to the Military Family Resource Centre, PO Box 10500 Station Forces, Edmonton, AB T5J 4J5. Arrangements in care of Graham's Funeral Service, Pilot Mound, MB 825-2848