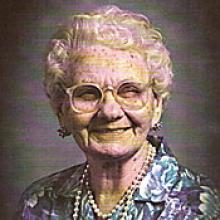 MARY KASKIW (EWANATION) 1907 - 2007 On August 9, 2007, Mom passed away peacefully at the Holy Family Nursing Home with her family at her side. She leaves to mourn, her children, Frank (Nellie), Rose Onofrey, Ed (Reta), Melvin (Maria), Shirley Slobodian (Julian); daughter-in-law Mary; grandchildren, Clarence (Norma), Vincent (Chris), Lynn (Rob), Laurette (Emile), Jerry (Darlene), Debbie (Hugh), Darlene (Joe), Daryle (Sandra), Charlotte (Roger), Wayne (Ann), Wanda (Roy), Jamie (Laurie), Edie, Willie, Michael (Jane), Trent, Brent and Tania, as well as 18 great-grandchildren and one great-great-grandchild. She was predeceased by husband Anton; sons, Jack and Stan; grandson Dennis Onofrey, and numerous siblings. Mom was born on August 28, 1907 at Marco, MB. In 1922, she married Anton Kaskiw and lived on the farm near Kelloe, MB where she raised her family. She moved to Shoal Lake, MB in 1955 where she resided for 22 years. There she spent her time quilting, gardening and making mats. Her home was open to all where many experienced her hospitality. She enjoyed nothing better than preparing a big meal for her family and friends. Mom liked a good joke and everyone waited to hear her infectious laugh. In 1977, she moved to Winnipeg to be close to her family. The last 10 years she resided at Holy Family Nursing Home where she made many friends with residents and staff. There she spent many hours playing a mean game of hola . She spoke lovingly to her children as well as staff by calling them honyitko (deary) right to the end. The family would like to thank the wonderful staff and pastoral care at Holy Family for their caring support. Funeral service will be held on Saturday, August 11, 2007 at 10:00 a.m. at Knysh Funeral Chapel, 1020 Main St. Prayers will be held at St. Helen's Roman Catholic Church in Shoal Lake, MB on Monday, August 13, 2007 at 7:30 p.m. Mass of Christian Burial will also be held at the Church on Tuesday, August 14, 2007 at 10:00 a.m., Rev. Fr. Michel Nault officiating. Interment to follow at St. Helen's Roman Catholic Cemetery, Shoal Lake, MB. Rae's Funeral Home (204) 759-2160