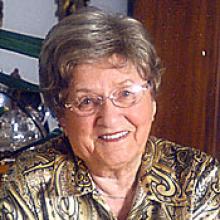 JEANETTE SLIPETZ (nee Welyki) Jeanette Slipetz passed away peacefully at Seven Oaks Hospital on Monday, August 20, 2007, in her 93rd year. She is survived by her daughter-in-law Willy Slipetz (Alfred Wiebe), Winnipeg; two grandchildren, Deborah (Yves Boie) and Byron, two great-grandchildren Camille and Francis, all from Montreal. In addition, surviving her are sisters- and brother-in-law, Christine Slipetz, Josephine Slipetz, and Tom Shymkiw; nephews, Doug and Wayne Taylor, Jerry and Tim Shymkiw, Don Welyki; and nieces, Christine Los, Shelley Slipetz, Joanne Rowland, Pat Linscott and their families. She was predeceased by her daughter, Marilyn (1987), husband Eugene (1989), and her son Richard (2000). She was born in Winnipeg in 1914, and at the age of 16, at the death of her mother, took charge of the household for her father, older brothers and sister. In spite of that, she obtained her grade 12 high school diploma . Her marriage to Eugene in 1934 brought about new aspirations, that included establishing an eventual successful business, City Tire Service, two children, Richard and Marilyn, and a new home in West Kildonan. Eugene and Jeanette celebrated their 50th wedding anniversary for family and friends in 1984, and had 55 years of harmonious wedded life until Eugene's death in 1989. Jeanette was a woman of many accomplishments and was very interested in horticulture. She was awarded an Honorary Life Membership in the Manitoba Horticultural Society for her many years of guiding both the provincial and the local West Kildonan society. She designed the landscaping along with the West Kildonan Parks Board in public areas such as the West Kildonan Library, Seven Oaks Hospital, Seven Oaks Arboretum and street boulevards, and judged Provincial and City home grounds. She had her own greenhouse to supply seedling to families and friends and was a successful grower of home orchids. After she moved into the Holy Family Towers, she was instrumental in designing and maintaining a colorful perennial garden there. She was an active contributing member to many Volunteer organizations such as the IODE (helping Hungarian immigrants to Winnipeg after their uprising in Europe), and an active life long member of Holy Family's Women's Auxiliary well into her late eighties. In her younger years she was a violin and piano teacher to beginning music students, who went on to claim fame in later life. In addition to her musical activities, she had a very practical nature and was a guiding force in her own home and cottage renovations. She also engaged in oil and ceramic painting and crocheted prize-winning tablecloths, bedspreads and afghans, much valued by her family. Her hands were never idle, and indeed admonished anyone whose hands were. Her indomitable spirit and will allowed her to live out her life in her own residence with the help of Homecare, daughter-in-law, Willy, nephews, Doug and Wayne, and friend, Fran DeBruyn. The funeral will take place at Cropo Funeral Chapel, 1442 Main Street, on Saturday, August 25, at 10:00 a.m. with Camille Slipetz-Bonnell, Ryan Los, Terry and David Taylor and Carey and Cindy Roess as pallbearers. Jeanette has been a faithful member of St. John's Cathedral and memorial donations, if so desired, can be sent to St. John's Cathedral, Memorial Fund, 135 Anderson Ave., Winnipeg, R2W 5M9. A LIFE WELL LIVED CROPO FUNERAL CHAPEL 586-8044