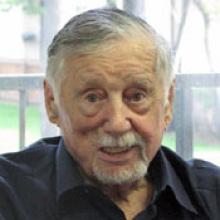 FELIX JOSEPH PIERSON 1920 - 2007 It is with great sadness that we must say goodbye to a great man after a courageous battle with cancer on November 23, 2007 at the age of 87, Felix Pierson passed away peacefully with his family by his side. Felix was a Son, Soldier, Husband, Father, Grandfather, Great-grandfather, Knights of Columbus member and Friend. Felix is survived by his wife Edmée (nee Nault); sons, Wayne (Laraine) Pierson, Glen (Maureen) Pierson; daughters, Mona (Rick) Geller, Diane Chimilar, Joy (Ken) Nachtigall; grandchildren, Carla (Dwayne), Christopher (Lori), Tammy, Kyla, Chad (Desiree), Shayne (Kara), Derek, Jason, Matthew; great-grandchildren, Dustin, Jaydon, Rhys, Taylor, Jordyn and Parker. Edmée's brothers and sisters, Rick (Barb) Nault, Marius (Patricia) Nault, Doris (Augie) Roy, Lynn Balaz, Laura (Louis) Cormier, Jeanine Goulet, Marie (Gerry) Lepage along with many nieces and nephews. Felix was predeceased by his parents, Joseph and Clarisse (nee Duhamel); Edmée's parents, Amedee and Maria (nee Perreault) and siblings, Clarrise (Pito) Gosselin, Josephine (Joe) Beaulieu, Mathieu (Lucy) Pierson, Joseph (Margaret) Pierson, Pete (Claudine) Pierson, Marcellin (Zita) Pierson, Alphonse (Vivian) Pierson, Paul, Doris, Adele and Henry. Felix was a proud member of the Queens Own Camerons during the Second World War and he was wounded in action on Christmas Eve 1944 in Holland and returned home. On July 5, 1947 Felix married the love of his life Edmée and they spent the last 60 years sharing a life of love, friendship and happiness. They started a family and raised five children together. Felix was a man with a great sense of humour and a heart so big his generosity was matched by none. Felix worked for Shell Canada for 35 years and joined the Knights of Columbus in 1945. He became a fourth degree Knight in 1963, was charter Grand Knight of Archwood Council and one of the founding members of the Archwood Council in 1983. The family is asking that in lieu of flowers, donations could be made to either Palliative Care at St. Boniface Hospital or the War Amps Foundation. A very special thank you to the Palliative Care doctors and nurses at St. Boniface Hospital who took exceptional care of Felix in his last days. And a special thank you to Sgt. Tyler of the Queens Own Camerons Highlanders of Canada for making the effort to open the Cameron's Museum and for treating Sgt. Felix Pierson with such respect and dignity; it meant a lot to Felix. JUST A COMMON SOLDIER He was getting old and paunchy, and his hair was falling fast, And he sat around the legion telling stories of his past. Of a war that he had fought in and the deeds that he had done, In his exploits with his buddies they were heroes, everyone. And though sometimes to his neighbors, his tails had become a joke, All his legion buddies listened, for they knew whereof he spoke. For we'll hear his tales no longer, for our Felix has passed away, And the world is a little poorer, for a soldier has died today. He was just a common soldier, and his ranks are growing thin, But his presence should remind us we may need his like again, For when countries are in conflict, then we find the soldier's part, Is to clean up all the troubles that others often start. If we cannot give him honour, while he's here to hear the praise, Then at least let's give him homage, at the ending of his days. Perhaps a simple notice in the paper that would say, our country is in mourning, cause a soldier passed away A memorial mass will be held on Monday, November 26 at 1:00 p.m. in Holy Family Catholic Church, 778 Archibald St. Interment will follow in the family plot at Green Acres Memorial Gardens, #1 Hwy. E. and Navin Road. This soldier has gone home, the war is over. And in the words of a great man So that's the issue . The Coutu family in care of arrangements: E.J. COUTU CO. FUNERAL DIRECTORS 680 Archibald St. 253-5086