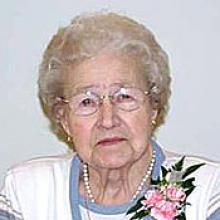 STELLA COPP (nee TOMCZAK) Peacefully, in her sleep, Stella passed away on November 23, 2007 at the age of 90 years old. Born in Narol, Manitoba on February 19, 1917, she was the youngest of 12 children. Stella was predeceased by her husband, Stanley, in 1987 and her daughter Patricia Gagne in 2001. Stella and Stanley worked together for many years at the North End Farmer's Market. In 1959 they built the Spud Stop on Highway 59 which they operated until her retirement in 1987. During her retirement she spent many years at Mother Theresa's Missionaries of Charity soup kitchen. Stella enjoyed traveling and her winter home in Florida. She is survived by her children Walter (Joyce), Stanley (Marcella), Grant (Connie), Debbie Kuzina (Terry), son-in-law Tony Gagne (Norma), 17 grandchildren and 24 great-grandchildren. Prayers will be held Wednesday, November 28 at 7:00 p.m. at Holy Redeemer Parish, 264 Donwood Drive. Mass of Christian Burial will be held on Thursday, November 29 at 11:00 a.m. at Holy Redeemer Parish with her grand-children as pallbearers. Interment to follow at Corpus Christi Roman Catholic Church, 5819 Henderson Hwy. Many thanks to the staff at Misericordia Health Centre for their compassionate care. In lieu of flowers donations may be made in Stella's name to Missionaries of Charity, 167 Aikins Street, or a charity of your choice. FRIENDS FUNERAL SERVICE 2146 Main Street 339-5555