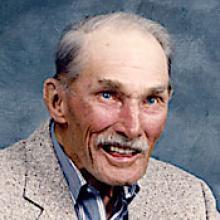 HARVEY FULTON Harvey was a born farmer, from age seven, when he rode horseback to the pasture to fetch cattle, to age 95, when he took pleasure in watching one last cattle drive in the month before his death on November 21, 2007. Born July 8, 1912 in the log house on the family farm in RM of North Norfolk (near MacGregor, MB), Harvey was the first son of Ernest and Ethel Fulton. From the beginning he was a lover of the land. He got as much pleasure out of growing a good crop of potatoes in his backyard garden in Birtle, MB as he did raising his prized Shorthorn cattle. For his constant devotion and persevering efforts, Harvey received the Canadian Shorthorn Award designating him a Legend of the Breed in recognition of substantial contribution and development of the Shorthorn Breed in Canada. Keenly interested in politics and the environment until his last days, he devoted his life to bettering his community. Harvey was a very strong supporter of the co-operative movement and showed his dedication by serving as a District Director for the Coop Implement company, assisting with the opening of the Credit Union in Birtle and acting as a director for Twin Valley Co-op Ltd. for over 30 years. In honour of his service on these boards, he received the Distinguished Co-operator Award in 1997. He also supported his community by serving on the local school board and as a councillor for the R.M. of Birtle. Harvey is survived by two sisters, Eva Robinson of Victoria, BC and E. Margaret Fulton of Salt Spring Island, B.C. plus sisters-in-law Marion Fulton of Birtle, MB, Olive Perry and Wilma Green of Brandon, MB. He was a loving father to Terry, Rick (Carla) and Ken (Lucille) and will be sadly missed by his grandchildren Darcy (Phil), Andrea (Dave), Mark (Melanie), Jill, Tim, Tara (Todd), Crystal (Matt), Jamie and great-grandsons Zachary, Thomas and Oscar along with numerous nieces and nephews. He was predeceased by his wife Millie, son Gary, brothers Lockie and Victor and sisters Katie and Mary. If friends so desire, donations may be sent to Birtle Hospital Palliative Care, Birtle, MB.