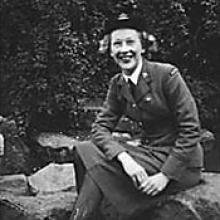 BERNADETTE ARNETT Marie Bernadette Marguerite Arnett peacefully passed away December 30, 2007 at the Grace Hospice in Winnipeg, Manitoba with the comfort of her family. The daughter of Marie-Louise and Hector Bisson, Bernie was born and educated in Quebec. Bernie graduated from the University of Montreal and subsequently attended nursing school at Saint Justine Hospital where she became a Registered Nurse, going on to obtain a post graduate degree in pediatrics from Saint Mary's Hospital in Detroit, Michigan. Bernie joined the Royal Canadian Air Force in October, 1941 and was posted to England where she became a member of the famous plastic surgery reconstructive team fondly known as the Guinea Pig Club of which she was a lifetime member. It was during her RCAF service that she met Flight Lt. Sheldon Arnett. They were married in 1943. Upon her release in November, 1945 she and Shel moved to Los Angeles and then back to Winnipeg where Shel took over the family's manufacturing business, Arnett Company Limited, from his father. Bernie's early family years often found her building swings and sandboxes in the back yard on Lockwood Street where she became affectionately known by the neighbourhood kids as the kool-aide mom. Summers at Clearwater Bay turned out to be her other back yard where she loved to work around the cottage. She did not hesitate to roll precarious boulders down the hill and into the lake, much to the horror of Shel. Bernie loved the Winnipeg Winter Club as it allowed her to be with family and friends at the same time. Her decorating passion became evident in the family home on Waterloo and stayed with her throughout her life. But that didn't stop Bernie from studying auto repairs or dedicating her time to numerous charitable causes. She was also active on the women's auxiliary at Saint John's Ravenscourt and Balmoral Hall. Bernie never gave up being French. She enjoyed the joie de vive of her brothers and sisters, all twelve of them, and wanted to bring a piece of that with her to Winnipeg. In 1964 she donated The French Award to River Heights Junior High School. She traveled extensively but had a special fondness for France. However, Winnipeg had become her home and she loved the many dear friends that she and Shel shared here. Bernie is survived by her sons Randy Arnett (Lurlei) and Doug Arnett, and her daughter Lin Williams (Bob) as well as by her grandchildren Nicole Arnett, Ashley Arnett, Sean Arnett, Kim Arnett and Chad Williams. She has one great-grandchild, Carson Cooper Williams. Bernie is also survived by her brothers and sisters George Bisson, Yvette Bisson, Jeanette Bisson, Helene Marchand, Madeleine Russell and Jim Bisson (Pierrette), her sister-in-law Frances Bowles and many wonderful nephews, nieces and cousins. Her lifelong friends know who they are as Bernie had a deep affection for them to the end. Bernie is predeceased by her husband Sheldon who passed away in 1981. Bernie wished to extend her deep thanks and admiration to all the wonderful, dedicated and caring staff at the Grace Hospice where she came to rest so very briefly. She also wanted to thank Dr. Houston and his staff who managed her health during her brief illness. She believed in God and is now in his care. In celebration of Bernie's life as a child, a woman, a wife, a mother and a friend, and in accordance with her wishes there will be a reception and all are invited. The family looks forward to seeing you at St. Charles Country Club, 100 Country Club Blvd. on Saturday, January 19, from 3:00 p.m. to 5:00 p.m. La lumiere s'eteint for Bernadette Arnett. She was an elegant lady who gave much love to this world and we will all miss her dearly. Thomson In the Park Funeral Home and Cemetery www.thomsoninthepark.com 925-1120 Life stories may be shared with friends and family across the globe at www.mem.com