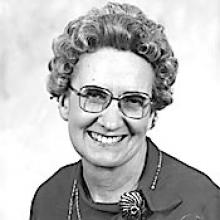 ETHEL MIRIAM DENNIS Ethel Miriam Dennis peacefully passed from this life into the arms of her beloved Saviour, on the Lord's Day, Sunday, February 3, 2008, at the age of 92. Auntie Ethel to so many, she was a kind, loving and generous woman, who devoted her life to serving Jesus, her aging mother, her extended family, her church, neighbours, friends, and children. She was so special to all who had the privilege of knowing her, for she had most certainly touched their lives. Ethel was born on July 15, 1915, in Swan River, Manitoba, to Raymond and Caroline Dennis, the third of the five Dennis children. The family moved to Winnipeg in 1931, when their father became the Road Master of the Canadian National Railway. She graduated from Gordon Bell High School, and then attended three years at Winnipeg Bible College. After completion of Bible School, she joined her father and brother, Rodney, at the C.N.R. where she became responsible for tracking the location and cargo of railway cars across Canada. She retired after 38 years amid accolades of respect from her railway contemporaries. With great devotion, she laid aside her own plans and dreams of missionary service to care for her mother until she passed away at the age of 93. During those years, she attended and served at Berean Pentecostal Church, playing the piano and teaching Sunday School. Her family and neighbourhood became her mission field. Ethel's door was always open to everyone. She was a wonderful cook, and an efficient, clever woman. The desire of her heart, and the focus of her life, was to bless and love others, and to do what she could to let all know that, For God so Loved the world, that He gave His only begotten Son, that whosoever believeth in Him, should not perish, but have everlasting life. (John 3:16). Even when her mind had been ravaged by Alzheimer's disease, she could be found rolling her wheelchair down the halls of Tuxedo Villa, repeating over and over again, Bless the Lord, oh my soul. What destroyed her mind and body could not destroy her spirit and faith. The family would like to express a special word of thanks to her devoted caregivers who, with great compassion, tended to her needs for so many years. Ethel was predeceased by her parents Raymond and Caroline Dennis, her sister Joy Kerr and husband Frank, her brothers, Ian Dennis and Rodney Dennis and his wife Dorothy. She is left to mourn, but also to rejoice, her dear sister Elsie Johns and her husband Blake, their children, Ray (Donna), Glenda (Al) and Joy (Oral) and their families, as well as her sister-in-law Bernice Dennis, and her beloved nieces and nephews, and their families. Well done, thou good and faithful servant. (Matt. 25:21) A special time of reminiscing, tribute and celebration of her Home going will take place on Saturday, February 9, 2008, at 2:00 p.m. in the Buntain Chapel of Calvary Temple, 400 Hargrave St. A private interment will occur at a later date. In lieu of flowers, donations may be made to the Calvary Temple Missions Fund or Manhattan Beach Retreat Centre. LECLAIRE BROTHERS in care of arrangements. 775-2220.