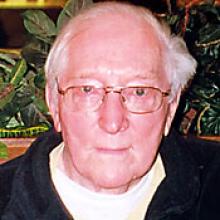 ALBERT WOLFE March 23, 1920 February 11 , 2008 Albert Wolfe, beloved husband of Mary Wolfe, passed away at the age of 87 years. Left to mourn his passing are his children Paul (Barbara) Wolfe of Calgary, Alberta and Janet Wolfe of Winnipeg. Missing their grandpa dearly are Shelley (Kelly) O'Neill of Calgary, AB and Connie (Randy) Kloschinsky and his much loved great grandchildren Bailie and Sydney Kloschinsky of Calgary, AB; sister-in-law Myrtle Wolfe, nephew David (Sandra) Wolfe and his niece Valerie Wolfe. Albert served the airforce in Yorkshire, England during Second World War. He taught in Elmwood Highschool for 30 years, also serving as head of Guidance within the school. His skills lead him to co-author Winnipeg School Divison's first guidance curriculum. He is remembered as a father figure to many students and was considered a mentor by many colleagues, leaving a piece of himself with everyone he came in contact with. He enjoyed the great outdoors and was a wonderful photographer. He also enjoyed a good book, and was a man of letters. His knowledge and skills in English led him to become the editor of the Victoria Beach Herald. Also finding the time to coach soccer, gymnastics and was an avid downhill skier. He loved life and lived it to the fullest . Funeral Service 11:00 a.m. Friday, February 15, 2008 at Kildonan Community Church 2373 Main Street with Rev. Brenda Fraser officiating. BARDAL FUNERAL HOME 843 Sherbrook Street, 774-7474 Condolences: www.bardal.ca